Why Don't the Rabbis Believe in Jesus?

"Why don't the rabbis believe in Jesus?" Many Christians who ask me this assume that all rabbis are extremely knowledgeable about the Hebrew Scriptures. And, they figure, it stands to reason that anyone who is familiar with the many passages that point to Jesus would be persuaded to believe in Him too.

But in fact, it is simply not the case that all rabbis know and believe the Jewish Scriptures.

The Hebrew Bible is only one of the holy books in Judaism. Traditional rabbis are likely to spend far more time studying traditional interpretations and commentaries from the Talmud and other rabbinical texts than they are on the actual Scriptures. Liberal rabbis are likely to embrace a higher critical view of the Bible, seeing it more as a source for moral guidance than divine revelation.

But there is another reason why the rabbis don't believe in Jesus: once they do, they are no longer considered rabbis. Rabbis are expected to believe and teach a religion that does not accept a New Testament belief in Jesus. To inquire earnestly about whether Jesus might be the Messiah is to question the authority of traditional Jewish thought. It requires a willingness to be removed from one's chosen career and stripped of one's standing in the community. It should be no surprise that most rabbis will not allow themselves to openly consider the claims of Christ. In fact, even a public recognition of Jesus as a wise Jewish rabbi can be enough to jeopardize a rabbi's standing. 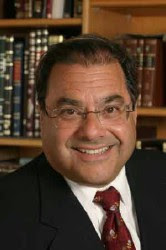 This was recently demonstrated by an outcry against Rabbi Shlomo Riskin, Chief Rabbi of the city of Efrat in Israel after he was video-taped discussing Jesus in a favorable light. Click here to see video.

Rabbi Riskin has been rubbing shoulders with evangelical Christians who support Israel. Apparently, he allowed this video to be made for his Christian friends in an effort to strengthen those relationships. In it, Riskin speaks of "Rabbi Jesus" in a Jewish context, and seeks to affirm common ground between Jews and Christians, especially in light of today's struggle against radical Islam.

Many Christians were so excited to hear this prominent rabbi speak favorably about Jesus that the video began to circulate widely on the Internet. I listened with interest to what Rabbi Riskin had to say, and frankly was not impressed. Rather than taking Jesus' Messianic claims seriously, he spoke of Jesus as a common rabbi who, like so many others over time, worked for the brotherhood of man and the unity of all, regardless of religious persuasion. I considered it faint praise to hear Jesus described as a kind of Jewish universalist—but apparently even that was enough to get Rabbi Riskin into some serious hot water.

One friend pointed out to me how similarly controversial it would be among Christians if a well-known pastor came out with a positive statement about Mohammed, the prophet of Islam. While I would never compare the life of Mohammed with that of the Lord Jesus, I got his point. For many Jewish people the comparison is apt, hence the visceral nature of the reaction.

I don't know what kind of a slap on the wrist Rabbi Riskin had to endure from his colleagues, but suffice it to say that within days, he taped a public apology for having made those remarks, claiming they were taken out of context.

This is but a mild example of the kind of disapprobation reserved for Jewish leaders who might show sympathies of any kind toward the man from Nazareth. Not too many years ago, reports circulated that a rabbi had interrupted a Christian prayer breakfast to announce that he had come to believe in Jesus as the Messiah. I tracked down the story and found that it was true. Rabbi Harold Vallins from Melbourne, Australia had indeed become a follower of Jesus. It turned out that I knew his brother, who was also a believer and had volunteered with our Toronto branch.

Bob Mendelsohn, who leads our Jews for Jesus branch in Sydney, Australia quickly contacted Rabbi Vallins. Soon after, I had the pleasure of making his acquaintance. His faith was genuine, and it cost him dearly. He suffered the loss of his position, but even more, he lost his relationships with his wife and children. Despite deep sorrow over the great losses he endured, Rabbi Vallins continued to have a strong testimony until he went home to be with the Lord a few years ago.

Back in the 1930's, well-known Jewish author Sholem Asch wrote a book entitled The Nazarene a sympathetic retelling of the life of Jesus. Despite the fact that he never once implied any conviction that Jesus was who He claimed to be, Ash was pilloried by the Jewish community leaders of his time, his reputation dragged through the mud. To this day, The Nazarene is seen as his greatest literary achievement, and as such it has indelibly tied his career to the controversy it provoked.

It should come as no surprise that the cost of following, or even being suspected of following Jesus is prohibitive, especially for rabbis or other prominent Jewish leaders who have a higher profile. Jesus warned that those who would follow Him should be prepared to "deny themselves." He observed somewhat darkly that He had not come to bring peace but a sword that would, "set a man against his father…" (Matt. 10:34-35). After Jesus' controversial healing of the man blind from birth, John's Gospel records the Jewish leadership agreeing, "that if anyone confessed that He was Christ, he would be put out of the synagogue" (John 9:22). Two thousand years has not changed that reality one bit.

Back in the 1970's a popular rock group called the Doobie Brothers had a hit song titled, "Jesus is Just Alright." The understated lyrics reflect the way that many people try to view the Lord of glory—domesticating him to a cool companion who does not demand full allegiance and worship.* Certainly that sort of Jesus would be more palatable to a general audience.

Thankfully, the recent incident with Rabbi Riskin reminds us of how truly impossible it is to "downplay" Jesus, especially in the Jewish community. However people choose to present Him, or present their views of Him, Jesus is radical, controversial and will not be patronized by bland affirmations. He has no interest in winning popularity contests or being well regarded by those who have no intention of bowing before Him in humble worship, whatever the cost.

Jesus told a crowd of people who were looking for Him to provide their lunch, "unless you eat the flesh of the Son of Man and drink His blood, you have no life in you" (John 6:53). At that, most of the crowd decided to leave. Jesus turned to his disciples and asked if they were leaving as well. Peter's response must likewise be ours today: "Lord, to whom shall we go? You have the words of eternal life" (John 6:68).

[* Admittedly, some sang that song in defiance of those who would mock Jesus; still, the casual nature of the lyrics does not reflect the role Jesus expects to have in the lives of His followers.]

Christ in the Feast of Pentecost - David Brickner (Book)

I am Jewish, can I become a Christian? - GotQuestions.org

What are some passages in the Hebrew Bible that talk about the Messiah? - Jews for Jesus