Turkey Lashes Out at Israel

A battle commonly referred to as Gog-Magog is foretold in Ezekiel 38-39. As I have anticipated - and news stories, both old and new, have confirmed as accurate - the nation of Turkey is steadily progressing toward becoming a participant in that future event which will see a Russian-Arab confederacy attack the nation of Israel in a perceived time of safety.

The nations most believe will be participants in the future Gog-Magog attack are as follows, all of them taken from Ezekiel's prophecy: 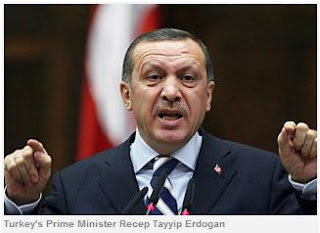 The latest? Ynetnews.com is reporting the following, in part:

Turkey's prime minister accused Israel on Monday of threatening peace in the region and using disproportionate force against Palestinians.

Prime Minister Recep Tayyip Erdogan urged Israel to stop violating Lebanon's airspace and territorial waters. He also called on the UN Security Council to put same pressure on Israel regarding nuclear arms as it does on Iran.

"We can never remain silent in the face of Israel's attitude. ... It has disproportionate power and it is using that at will while refusing to abide by UN resolutions. We can never accept this picture," Erdogan said. "These steps threaten global peace."

Israel is a threat to global peace for defending itself? From the perspective of the world, in perfect keeping with bible prophecy, sure!

In Zechariah 12:3 we see Jerusalem described as a "burdensome stone" to all the people of the world, Mr. Erdogan's words spoken this very day implying same.

The bottom line? Everything - and I do mean everything - foretold in bible prophecy is lining up for fulfillment, but watching what has taken place in relation to Turkey swinging from being a West-aligned, mostly Israel-friendly nation to the nation we see in Ezekiel 38-39? It has been dramatic thus far and is continuing to play itself out before our very eyes!