Twenty-two days ago, I wrote about the end of the Democratic Party.

"Next year could well mark the beginning of the end of the Democratic Party as we have known it since 1972," I wrote at a time when no one could imagine Republican Scott Brown could win Ted Kennedy's Senate seat in Massachusetts.

Today, he will do that. I'm quite sure.

The Democratic Party is unraveling at the seams faster than almost anyone could have imagined.

Who could have foreseen entrenched Connecticut Sen. Chris Dodd calling it quits rather than facing certain defeat at the polls next November?

Who could have foreseen entrenched North Dakota Sen. Byron Dorgan doing the same?

Who could have foreseen New Jersey rejecting Gov. Jon Corzine?

Who could have foreseen the landslide victory for Republican Bob McDonnell in Virginia, a state won by Barack Obama in last year's presidential race?

And now the state that more than any other epitomizes one-party rule, Massachusetts, on the precipice of doing the once-unthinkable – turning over Ted Kennedy's seat to a Republican.

What is going on here?

I hate to say it, but I told you so. I predicted that the election of Obama in 2008 would actually provide the wake-up call America desperately needed.

Had John McCain won the presidency, none of this would be happening. We're about to see a political realignment of America that is historic in scope. It's far bigger than 1994. It's bigger even than 1980.

And it's got almost nothing to do with the Republican Party. 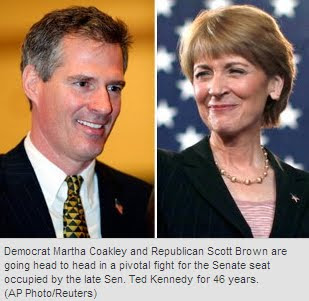 The Democrats have come undone. They sowed the seeds of their own destruction with their overreaching in 2009. Left to their own devices, they tipped their hand and showed what they are really about – big, bigger, biggest government. It was an unprecedented power grab that will ultimately result in their disempowerment. Even without meaningful or organized or coherent opposition, Democrats are facing convincing rejection of their candidates and their agenda.

A friend wrote to me the other day and said, "Your book 'None of the Above' is looking more prophetic every day."

In 2008, I wrote that terribly unpopular book. It was so unpopular, I am now offering it as a political collector's item for $1.

Republicans didn't want to hear about it.

Conservatives didn't want to hear about it.

Not even WND readers wanted to hear it.

To say the book fell flat would be an understatement.

But I'm glad I wrote it. Because it was right. Having breezed through it again recently, I am proud of my insight. It was more prescient than I remembered.

It quite simply argued that a defensive vote for John McCain was a mistake. Even though Obama would represent a short-term disaster for America, the longer-term impact would be healthy, very healthy, for the country, I wrote.

"Obama's policies of taxing and spending and clamping down on freedom in health care and other areas will prove massively unpopular when Americans see them fail, as they always do," I wrote. "Obama and the Democrats will try to blame past administrations for the problems, just as Jimmy Carter tried to do. But with Democrats running Congress and the White House, it will be easy for Americans to see who is to blame.

"On the other hand, let's pretend John McCain wins the presidency in 2008. In all likelihood, there will still be a Democrat-dominated Congress. While U.S. policies under McCain and a Democrat Congress will be nearly equally disastrous, it will be the Republican president who bears the brunt of the blame in 2012. Guess what we'll get then? We'll get Barack Obama anyway. Or, perhaps, Hillary Clinton."

If anything, my prediction was understated.

While I foresaw big Democratic losses in 2010, I could not have imagined the speed at which the party would disintegrate – even in Massachusetts.

Now I no longer think it is possible to overestimate the potential for the 2010 political shock waves.

Massachusetts, historically, played a great role in American freedom – albeit 230 years ago.

It's time for Massachusetts to lead, again.

The Kennedy dynasty is over.

The Democrat dynasty is over.

Are Republicans 'Due'? - WorldNetDaily (Thomas Sowell)