Malaysia Churches Attacked over Use of 'Allah'

A chain of nine church attacks have disrupted Malaysia since late December. The recent violence appears to have had a specific trigger - the High Court's recent decision to overturn the country's ban on the Christian use of the word "Allah."

It is not terribly unusual in the Arab-speaking world for Christians to use "Allah" as the word for "God" without any specific reference to Islam. Malaysia's Christian communities also use "Allah" because it is the word used for God in Malay-language Bibles – which largely originate in Indonesia where Christian use of "Allah" is common. In Malaysia, though, Christians were not allowed to use "Allah" for "God" in other written publications. The High Court changed that by removing the ban on December 31st. 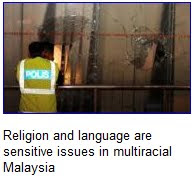 Malaysian Muslims immediately protested, declaring that "Allah" belonged to Islam and was not a name for other religions to use. A spurt of attacks followed, including spray-painting, rock throwing, and even firebombing of Christian churches. The Metro Tabernacle Church in Desa Melawati was the first hit and was badly damaged. The others attacks have left superficial damage, and churches will have to remove paint and replace windows. Regardless of the severity of the attacks, they have shaken up people of both religions in a land where religious tensions have been kept relatively low.

The big issue, say protestors, is they fear that Christians will try to convert Muslims by using "Allah" for the Christian God as a way to make Muslims feel comfortable. Other Malaysian Muslims disagree with the conflict, arguing that it is not a dire issue. Marina Mahathir wrote in her blog that a confident Muslim "will not walk into a church, hear a liturgy in Malay or Arabic where they use the word ‘Allah' and then think that he or she is in a mosque."

The Malaysian government has made a policy of promoting religious peace in their land and has condemned the recent attacks. The Home Ministry secretary, Gen. Mahmood Adam, told reporters, "These outrageous incidents are acts of extremism and designed to weaken our diverse communities' shared commitment to strengthen racial unity."

One Muslim, Stephen Ng, on MalaysiaKini.com urged his fellow Muslims to seek unity in the country. Local businessmen also want the quarrel to calm down. Those who depend on tourism do not want the fear of violence to dissuade visitors from coming and spending their money. According to The Malaysian Insider, one businessman involved in regional IT business says that investors are watching the situation closely.

"Malaysia was known in the past as a peaceful multiracial country. But now attacks on churches are beginning to happen. If you are an investor, the attacks are something you would consider a high risk. The question now is: were the attacks a one-off thing or is it going to get worse?"

Is Allah the God of the Bible? - Answering Islam

Answering Islam: The Crescent in Light of the Cross - Norman L. Geisler (Book)