It Ain't Just Cold in Fargo

The weather outside has certainly been frightful around the world. With snow falling in record amounts from New England to the Korean peninsula and icy cold threatening Florida's orange crops, the winter is off to a chilling start. And while Britain may be facing its coldest winter in 100 years, hundreds of people in Tajikistan face the bitter cold having recently lost their homes in an earthquake.

The UK: Natural gas prices leaped in Britain as temperatures dropped into the teens, with temperatures as low as 14 F (-10 C) in Scotland and northern England. Hundreds of schools have closed and train lines have shut down due to the cold and snow, and major arteries are clogged with slow-moving cars and accidents. Forecasters are predicting the worst winter in 100 years for Britain.

The United Kingdom is at a fairly high northern latitude (London 51°30'N, Glasgow 55°51'N), but as the Gulf Stream sweeps up from the Gulf of Mexico toward Norway, it keeps the British Isles relatively warm and temperate. The average January temperature in Glasgow is 38°F (3°C), much different than the frigid 2°F (-16.4°C) average in Labrador across the North Atlantic to the west. This year, the ice and snow from a cold arctic front promise to continue to bottle up highways and keep people in their thermal underwear. 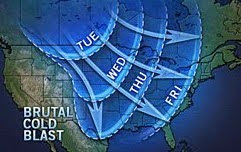 Even Houston, Texas (29°45'N) is watching the temperature drop into the 20s and upper teens.

Florida orange growers have gone to work overtime to save their citrus crops (which ripen in December and January). Crops typically get damaged if exposed to temperatures below 28°F for more than 4 hours. If the temperatures do not drop below the critical point, though, the cool weather could be good for fruit quality.

SE ASIA: Seoul (37°34′08″N) received more than 11 inches of snow on Monday, the worst snowfall since Korea started measuring those sorts of things in 1937. When northern Idaho receives a simple 11 inch snowfall, the snowplows bust out and clear the roads. For a city like Seoul which rarely sees snow, 11 inches can be absolutely paralyzing. Hundreds of flights from Seoul were cancelled Monday as were flights from Beijing and the main airport on Japan's northern island of Hokkaido. Not everybody is complaining about the snow, though. "It's something unique in Seoul," Kang Kyung-hye, a 58-year-old housewife, said while she took pictures.

TAJIKISTAN: When a 5.3 earthquake hit Tajikistan on Saturday, the situation became far more serious for hundreds of people. Nearly 100 homes were destroyed and another 900 were damaged in the quake which hit this poor mountainous nation. Nearly 600 people have been forced to hunt for shelter with neighbors or relatives or find some other way to survive in the freezing cold. Tajikistan's Rapid Emergency Assessment and Coordination Team (REACT) is taking charge of getting winter tents, blankets and hygiene kits to the affected area, which is well over 100 miles through the mountains from the capital of Dushanbe.

The cold weather is an inconvenience for most people. It means higher heating costs and having to leave a trickle of water running in the sinks so that the pipes don't freeze. It's a time when homeless shelters fill up and when folks pull out an extra quilt or two for the bed. It can be a time of roaring fires and movies in the den.

As we snuggle up with slippers and hot cocoa, though, we need to remember our brothers and sisters who are suffering with inadequate heat for their homes, and perhaps no homes at all. Even if we aren't sure how else to help the people in Tajikistan, we can always pray for them and the ministries that are reaching out to them. We can also support our local Salvation Army or other homeless ministry, whether through prayer or donations. We might help buy propane for the lady with the five children who lives next door. Whatever we choose to do, let's not forget our neighbors around the world during this icy cold January.