A seven-member team of Israelis has left for Haiti to assess what type of aid is most needed by the tragedy-struck island nation after it was hit by a massive earthquake late Tuesday afternoon. The delegation, comprised of officials from the Ministry of Foreign Affairs, IDF Home Front Command and IDF Medical Corps Personnel departed at 11:30 a.m. Israel time. Among the team members are experts in the fields of engineering, medical, logistics and rescue and recovery, government officials said.

Medical supplies, a field hospital, food stuffs and/or other humanitarian aid are among the types of assistance being considered for the desperately impoverished nation, sources said. 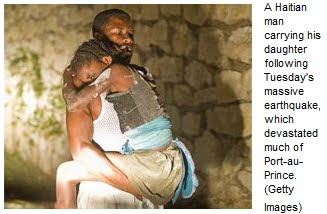 No Israelis have been identified among the victims of the quake that rocked the Haitian capital of Port-au-Prince, according to Israeli Ambassador to the neighboring Dominican Republic, Amos Radyan. However, the condition of the Jewish families who live in the country is not clear, he said. Telephone lines are still down, and the Israeli embassy has been unable to contact any of the families.

There are approximately 25 to 30 Jews left in Haiti at present, most of whom live in Port-au-Prince. Israel and Haiti maintain full diplomatic relations, but the Jewish State does not have an embassy in the country, which is served by the embassy in the neighboring Dominican Republic.

The earthquake, which measured 7.0 on the Richter scale, was the worst to hit the area in more than 200 years and the biggest quake ever to strike the impoverished island nation. It caused the National Palace to collapse and destroyed the local headquarters for United Nations peacekeepers as well as a hospital. Many U.N. employees are listed as missing, officials said.

A number of aftershocks followed the initial tremor and many more are still expected. According to the U.S. Geological Survey’s National Earthquake Information Center, the depth of the earthquake was about six miles. It measured nine on a 1-to-10 scale that gauges the level of shaking on the ground.

Jews have lived in Haiti since 1492 CE, when Luis de Torres, a Converso, arrived as an interpreter for Christopher Columbus, albeit for the most part through hiding their Judaism. Archaeologists have uncovered an ancient synagogue of Crypto-Jews in Jeremie, and Jewish tombstones have also been discovered in port cities such as Cap Haaitien and Jacmel.

Prior to World War II, the island was home to a diverse community of Jews from France, Poland, the Netherlands, Lebanon, Syria, Egypt, and other lands. In 1937, the Haitian government also issued passports and visas to some 100 Eastern European Jews fleeing the Nazi Holocaust. By the late 1950s, many of these Jews had left the country in order to ensure that their children would marry other Jews and not assimilate.

How to help victims of the Haiti earthquake - USA Today

Up to 100 missing in UN office collapse in Haiti - Forbes

ReadyQwik - Emergency Preparedness Kit - Over 100 items in place for when the Unexpected Happens!!! Nothing Requires Batteries or Electricity.