Iran's Ayatollah Storing up His Treasures

The Ayatollah Khamenei is not an especially revered person in Iranian politics these days. The controversial reelection of President Mahmoud Ahmadinejad in June began a wave of protest and unrest that never really went away, and the government responded harshly to recent demonstrations on the Shia Muslim festival of Ashura. Hundreds of demonstrators remain detained, and even university professors are criticizing the current government for its violence and weakness.

The supreme leader of Iran, Grand Ayatollah Ali Khamenei, is supposed to be the holy spiritual leader of a devout Islamic nation. Regardless of the man's private or public devotional life, we do know that he lives in opulence with the ridiculous amount of wealth he's siphoned off the Iranian people. According to Iranian filmmaker Mohsen Makhmalbaf, not only does Khamenei own eight planes, five helicopters and over 1200 cars and $40 million in horses, but the supreme leader has built up million-dollar collections of odd things like tobacco pipes and antique jewel-encrusted walking canes. 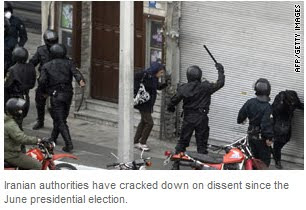 These kinds of revelations, which were published on Makhmalbaf's website on December 28, will certainly add to the country's anger toward the government. Some 500 people were detained on December 27 and Iranian police say 300 remain in custody. Eight people were killed during the protest crackdown, including a nephew of opposition leader Mir Hossein Mousavi. General prosecutor Gholam Hossein Mohseni Ejehi said some detainees could be put to death as enemies of Allah for demonstrating against the ruling clerical government.

"After Ashura, anyone who takes part in riots will be considered as 'mohareb' (waging war on God) and an opponent of national security," Najjar said, according the IRNA news agency.

The Iranian establishment has accused foreign enemies of stirring up unrest and supporting troublemakers in their country. Intelligence Minister Heydar Moslehi accused the foreigners of "leading a psychological war against the system."

Protests have continued despite the threats, however, demonstrating the depth of the unrest within the Iranian populace. Even university professors – men of position (or in exposed positions) – have openly criticized the supreme leader for the government's recent violence. A group of 88 Teheran University professors signed a letter calling the government's harsh response a sign of weakness. The letter read:

"Nighttime attacks on defenseless student dormitories and daytime assaults on students at university campuses, venues of education and learning, is not a sign of strength. ... Nor is beating up students and their mass imprisonment."

Students have been a major source of support for reform candidates and ideas. In the late 1990s students provided a major push for greater freedoms. "The universities are the little engines that make the big engine work," said Mehrzad Boroujerdi, an Iranian affairs expert at Syracuse University. "The students are the brains and the body of the opposition movement."

Whether Iran is in the middle of another revolution is uncertain. Even if it is, Khamenei hasn't got all his walking canes in one basket. He's apparently spread around a significant portion of his $billions in banks far outside of Persia.

A supreme leader at bay - Economist

Inside the Revolution: How the Followers of Jihad, Jefferson & Jesus Are Battling to Dominate the Middle East... - Joel C. Rosenberg (Book)