A Historic Christian Blind Side

There was a wonderful movie with a strong Christian message in 2009. It was called "Blind Side." This was the true story of Michael Oher who plays for the National Football League's Baltimore Ravens. Oher was a very big young black man whose mother was a drug addict, he didn't know who his father was, hadn't seen his other siblings in years and the school system had essentially rejected him. He was trying to find his way when a well-off white woman Leigh Anne Tuohy took him under her wings, brought him into her family and eventually she and her entrepreneur husband Sean adopted Michael. They saw to his education, his acceptance in college and helped guide him to become a successful man. 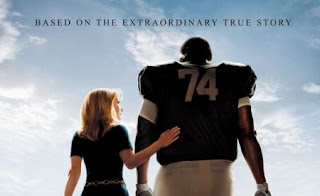 $208.5 million later, "Blind Side" is historic. Sandra Bullock, who played Leigh Anne Tuohy, is the first female actress to lead a movie over the $200 million mark. Now that says a lot. There are a lot of actresses in the business who are more famous than Bullock - Meryl Streep, Julia Roberts, Kate Winslet, Reese Witherspoon - just to name a few. In the age of blockbuster movies, however, none of them have topped Bullock and "Blind Side." In fact, Bullock and "Blind Side" have nearly doubled the haul of Streep's best - "The Devil Wears Prada" - and Roberts' best - "Erin Brockovich." The only other to come close was relatively unknown actress Nia Vardalos who was the lead in "My Big Fat Greek Wedding."

Bullock says she learned something in doing the movie. In her words,

"...one of my biggest questions was how people use their faith in their religion as a banner and then they don't do the right thing... But they go, 'I'm a good Christian, and I go to church, and this is the way you should live your life,' and I told Leigh Anne...'One of my largest concerns stepping into this was that whole banner-hold.'...It scared me because I've had experiences that haven't been great. I don't buy a lot of people who use that as their shield.' And she was so open and honest and forthright, and I said, 'Wow, I've finally met someone who practices but doesn't preach.'...so I finally met people who walk the walk, and it makes me happy, really happy."

There is a strong message in all of this. First, it is a message to Hollywood. Americans don't need nudity, foul language and counter culture misadventures to enjoy a movie. Whether it is a movie in the theatre or on the stage of life, people are watching. We as Christians need to take heart what Jesus said in Matthew 7:16, "Ye shall know them by their fruits." People like Sandra Bullock are more likely to recognize Christians by their actions than they are by their words. And they can smell a hypocrite from a long distance, downwind or not. Leading by example is what Christ did. Its what Leigh Anne Tuohy did. And its what we all should strive to do - our actions can have a lasting impact on people and nations.

The Blind Side - Official Trailer