The Muslim Christmas underwear bomber incident has prompted a US government crackdown on airport security, but many wonder if the action is the result of creating crisis to reduce liberties. Last year, sources within the US security system said that because of the current Administration's relaxing of security measures and the prohibition of certain security procedures established by the Bush Administration that terrorist attacks against Americans were going to increase in a matter of time. They said that Muslim terrorists were emboldened by the White House's kinder approach toward Islam and that many methods of collecting information on would-be terrorists had been banned. 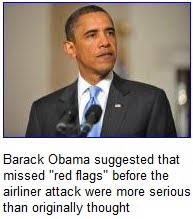 The US government has now requested that people flying from 14 countries receive extra security checks at the airports. This is a reasonable request that doesn't go far enough, but it has caused a worldwide ruckus. Nigeria, where the Muslim Christmas underwear bomber originated, says that the US is discriminating against its country. Nigeria's information officer says that Nigeria doesn't have a history of terrorism, so it should not be discriminated against. She says "It is unfair to discriminate against over 150 million people because of the behavior of one person." Anybody that has traveled to Nigeria knows that it is one of the most unsafe places in all of Africa. Her comments are laughable.

The list of 14 countries that the US government wants to keep an eye on are: Cuba, Iran, Sudan, Syria, Afghanistan, Algeria, Iraq, Lebanon, Libya, Nigeria, Pakistan, Saudi Arabia, Somalia and Yemen. Cuba is officially denouncing the policy as "anti-terrorist paranoia." Associated Press reports that airports in many of these countries are ignoring the US request and even some of America's allies in the European countries of Germany, France and Spain are reticent to comply with the request. The US government, however, has the upper hand as it can fine airlines or bar them from flying in the US if they do not comply. Meanwhile, Americans are subjected to even stronger security at airports.

AP reports that government officials are finally transferring dozens of names onto its "terrorist watch" list and dozens from the "terrorist watch" list to the "no fly" list. If not for the current Administration's relaxing of security standards, these actions would have been ongoing, but now law abiding citizens are subject to even more restrictions. WorldNetDaily asks if it is possible that this "administration is intentionally creating crisis for the purpose of converting America into a full-fledged socialist state?" Americans should strongly question this government. Ecclesiastes 7:7 says, "Surely oppression makes a wise man mad." When will the wise rise up in righteous anger?