The response to the nine-state recall effort launched by the American Civil Rights Union has been tremendous. Emails are coming in asking what to do. People are tired of this unconstitutional government lording its power over them. But on what grounds, they ask, do we recall? There is no simpler answer than fiscal irresponsibility and malfeasance. New figures released by the government as reported by Associated Press are astounding. You, your children, your grand children and most likely your great grand children will be strapped with such debt that it will never be able to be repaid. This alone, is tyranny because it enslaves generations to the federal government. 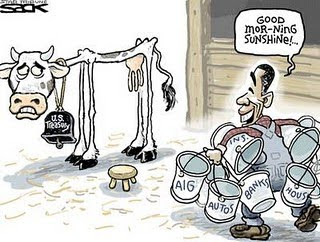 The national debt as of January 22 was $12.3 trillion, nearly $40,000 for every man, woman and child. AP reports that the federal government spent $1.4 trillion more than it took in last year. That's over $4,000 for every man, woman and child in the United States. In the 1980's, Democratic politicians were screaming bloody murder over then President Reagan spending $3.0 trillion on national defense. Of course, they ignored that the dividends on that defense spending was the collapse of the Soviet Union, the most evil empire of the era. In addition, Reagan tax cuts resulted in a 20 year surge of entrepreneurship that tripled the size of the U.S. Economy, created millions of jobs, dropped inflation and interest rates.

This government, under the leadership of politicians that are robbing the national wealth and redistributing it through bailouts, health care socialization, and preferential treatment of certain industries over others, has created higher unemployment, much the same way that the Carter Administration did before Reagan cleaned up the mess. But this time it is different. We have politicians in the Senate, House and at the White House who are remaking America into the image of a European socialist democracy. This is against the supreme law of the land - the U.S. Constitution. And for a nation comprised of Christians, socialism is humanism, which is against the laws of God.

General Counsel of the American Civil Rights Union Peter Ferrara wrote in Fox News Opinion that "From healthcare to global warming to stimulus spending, corporate bailouts, deficits, federal debt and beyond, Congressional leaders have been dismissive of alternative views, insisting that they know best...Today's Congressional majority is threatening to dump a load of bad legislation on the country despite the public's opposition, daring us to try to clean it up later. Only a Right of Recall can prevent such abuses in the future."

"The night is far spent, the day is at hand: let us therefore cast off the works of darkness, and let us put on the armor of light."

Do the States Hold the Answer to a Runaway Congress? - RecallCongressNow.org

We must tackle the debt threat now - The Hill

We Really CAN Throw the Bums Out! - FOX News