The Arrogance of Political Parties and the Future of America

Massachusetts voters fired a political shot across the bow of tyranny in electing "independent" Republican Scott Brown to fill the Senate seat left vacant by the late Ted Kennedy. And this election was heard around the world, not unlike the first shot fired in the Revolutionary War in the battle at Concord. Republicans are boasting that this is a referendum on the White House's socialist healthcare program and is indicative of a Republican Party recovery. Democrats defiantly insist the election was poorly run by their candidate and they will press ahead with their budget busting socialist programs. Neither is right. This vote is the public manifestation of a revolution that is sweeping the nation with a clear message. 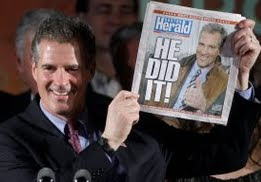 Americans are sending a clear signal to arrogant and evil politicians that graft and corruption; that unconstitutional socialist programs; that bribes in the form of "quid pro quo"; that spending generations of Americans into oblivion is no longer accepted practice. Americans have seen the change that was promised and it is unacceptable. Both political parties should read this as not a vote for or against their particular candidate, but rather the marked beginning of a movement where there are going to be vast changes in the US Congress through the next few elections. These will be non partisan changes, although the Democratic Party will feel the brunt of them.

They are non-partisan because Americans believe both parties have been willing participants in destroying America's greatness. The Democratic Party especially has ridiculed Americans and has ignored them as they voiced disagreement with socialist healthcare and unconstitutional tax-funded bailouts and takeovers of American enterprise. Last April, Tea Party meetings were held around the nation. These upstanding American citizens were held in contempt by the leftist news media, were slandered by politicians, and were harshly demeaned with derogatory sexual innuendo by haughty politicians, pontificators and pundits. This disrespect continued at town hall meetings throughout the summer.

Now the unsurpassed arrogance has begun to pay dividends at the ballot box. But Americans - generally very forgiving and kind to their politicians - must have the courage to continue removing these scoundrels until every last one of them who votes unconstitutionally is gone. And the replacements, irrespective of party, must know that if they follow in their predecessor's footsteps, they too, will be ousted. As Christian Americans, we must issue a clarion call to our countrymen that we must elect only those with Christian values to office.

"Pride goes before destruction, and a haughty spirit before a fall."

These politicians must fall before the nation is destroyed.