JERUSALEM – A group of hundreds of prominent Israeli rabbis here today slammed Prime Minister Benjamin Netanyahu's decision to freeze Jewish West Bank construction as an "irresponsible move that will only cause bloodshed in the region."

"This move not only jeopardizes the residents of Judea and Samaria (the West Bank) but will ultimately endanger every Jew in every part of Israel," read a statement from by the Rabbinical Congress for Peace, a coalition of more than 300 Israeli rabbinic leaders and pulpit rabbis, including some of the most respected rabbis in Israel.

The leaders of the Congress asked for an immediate meeting with Netanyahu to "point out his suicidal actions and present to him Jewish law rulings regarding a true and durable peace for the Jewish nation and stability in the region as well."

"There is a clear ruling in the Jewish Code of Law [Orach Chaim Chapter 329] that warns against giving up land to foreigners," the rabbis statement read. 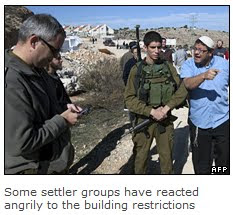 Netanyahu last week announced in a national address that his government had approved a 10-month halt to the construction of new Jewish homes in the West Bank as a bid to restart talks with the Palestinians. He said Israel would not stop construction in eastern Jerusalem and would still allow the building of West Bank synagogues, kindergartens and necessary municipal structures.

Describing the decision as a "painful step," Netanyahu said he was "taking the issue out of broad national security considerations with the goal of renewing negotiations to achieve peace with our neighbors, the Palestinians."

The Palestinian Authority, however, immediately rejected the freeze and demanded more.

Nabil Abu Rudaineh, a top aide to PA President Mahmoud Abbas, told reporters the Palestinians "reject returning to peace talks without the complete cessation of settlement activities in the West Bank and Jerusalem."

Chief Palestinian negotiator Saeb Erekat urged the U.S. to pressure Israel to freeze all construction activity completely in both Jerusalem and the West Bank.

Fatah's strongman Mohammed Dahlan stated Netanyahu's offer "proves once again that Israel is interested not in peace, but in creating facts on the ground" and stated that "overlooking ongoing construction in Jerusalem will put the peace process in jeopardy."

Never in the history of regional talks here did restarting Israeli-Palestinian negotiations depend on any freeze of Jewish construction. The issue largely began after President Obama demanded Jewish construction be halted in the West Bank and eastern Jerusalem, leading to a hardening of the PA's bargaining position.