Pledging to Each Other Our Lives, Our Fortunes and Our Sacred Honor

Many are asking me what I meant when I said that I will not participate in the socialist health care program that forces citizens of the United States to pay for killing the preborn, the setting up of tribunals to counsel the elderly on end of life decisions and compels citizens by penalty of imprisonment to participate in its socialist program that has numerous other immoral aspects - all under the auspices of the compassionate giving of health care by the government. I mean that I will not participate. I will not sign up for it. I will not pay into it. It is against my Constitutional rights. Peter and the Apostles told the Sadducees in Acts 5:29,

"We ought to obey God rather than men."

And I will do so with passion.

The Constitution requires the government to support the citizens right to life, liberty and property in the Fifth Amendment. The Tenth Amendment says,

"The powers not delegated to the United States by the Constitution, nor prohibited by it to the states, are reserved to the states respectively, or to the people."

This means that whatever is not granted by the Constitution is not in the purvey of the government - forcing citizens to pay for health care, to pay for abortions, etc., is not granted by the Constitution. And the First Amendment not only protects speech, religion, and assembly, but also the redress of grievances. Our leverage of redress against tyranny notwithstanding violence is non-participation. 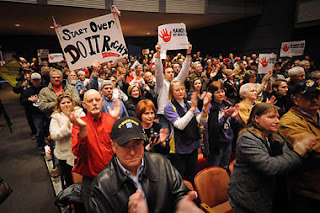 I will not be alone. Already there are resistance groups being established across the nation - both from a violation of religious freedom as well as other Constitutional violations that this government has perpetrated.

For example, Matt Staver, Founder and Chairman of the Liberty Counsel, says that he is ready to put his organization behind challenging "the constitutionality of the bill since Congress has no authority to require every person to obtain insurance coverage and has no authority to fine employers who do not provide the coverage standards that are required in the bill." Legislators in 28 states reportedly are introducing bills to prohibit any law from compelling citizens to participate in a health care system.

These are examples that are starting to rise from the groundswell of true American patriots and Christians across the nation. But this is not a signal to sit on the sidelines and think that someone else will take the risk and do the heavy lifting. This government is conducting a subversive, undeclared war against its citizens. All who serve the one true God and call themselves Americans are impacted and have a responsibility to respond. It will take the resolve of our Founding Fathers to prevail. As they signed their names in the Declaration of Independence,

"...with a firm reliance on the protection of Divine Providence, we mutually pledge to each other our lives, our fortunes and our sacred honor."

Boehner: Senate Dems have put their votes 'on the auction block' - The Hill