O Little Town of Bethlehem! - The Place of Our Savior’s Birth

The prophet Micah actually named the place where the Messiah would be born. He wrote:

But thou Bethlehem Ephratah, though thou be little among the thousands of Judah, yet out of thee shall he come forth unto me that is to be ruler in Israel; whose goings forth have been from old, from everlasting" (Micah 5:2).

Even King Herod’s Temple advisors could tell him where Israel’s future king would be born:

"When he had gathered all the chief priests and scribes of the people together, he demanded of them where Christ should be born. 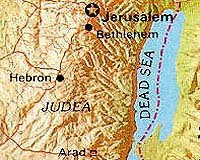 Located just five miles south of Jerusalem, Bethlehem was the home town of David, who became king. It was the place where Rachel, mother of Joseph and Benjamin, was buried.

Matthew tells us that when Herod slaughtered the children under two years of age, it was the fulfillment of an Old Testament prophecy:

"Then was fulfilled that which was spoken by Jeremiah the prophet: saying,

"In Rama was there a voice heard, lamentation, and weeping, and a great mourning, Rachel weeping for her children, and would not be comforted, because they are not" (Matt. 2:17,18).

The passage in the second chapter of Micah actually takes the reader into the far future to the Tribulation Period. He opens the previous chapter (4) by saying:

So, why did Micah digress to tell us about the first advent of Christ? We have only to read Micah 5:3 to learn why:

"Therefore will he give them up, until the time that she which travaileth hath brought forth: then the remnant of his brethren shall return unto the children of Israel" (Micah 5:3).

Micah reminds us that the First Advent of the Messiah was not for the purpose of setting up the Messianic Kingdom. Christ came back then to be rejected. As a result. Jesus gave them up for judgment. The Romans destroyed Jerusalem; and sold the Chosen People on the slave markets of the world.

The verse tells us that He gave them up until the time that Israel would be in travail. Micah says,

"the remnant of his brethren shall return!"

And that brings us to our generation. Out of the Jewish holocaust of World War II, wherein six million Jews were slaughtered, the nation of Israel was birthed.

We celebrate the birth of our Savior each December, but we are fully aware that today, Israel is poised to be blessed by the return of the Great King who was born in Bethlehem.

In spite of all that Satan might do to prevent heaven’s kingdom, nothing can stop it. Jesus is coming to this generation. We know this because of the rebirth of Israel. The "remnant" has returned!

Bethlehem was also the city of Ruth and Boaz. Ruth is a type of the Church. She was a Gentile bride who married Boaz, the kinsman redeemer. Ruth was concerned that Naomi’s kinsman redeemer buy back the land that Naomi had lost. Through the marriage, Naomi’s land was redeemed.

This is a prophecy fulfilled in 1948. Check out the history of the Jewish return and you will find that Christians helped to bring the Jews back to their ancient homeland.

Who got the better of the deal — Naomi, whose land was redeemed? Or Ruth, who married the kinsman redeemer? From my viewpoint, Ruth got the better deal. She lived out her life in the loving care of her husband. The name Ruth means, "beautiful companion." She once said to Naomi:

"Whither thou goest, I will go; and where thou lodgest, I will lodge: thy people shall be my people, and thy God my God" (Ruth 1:16).

That is the way Christians feel about the Jewish people. It is as if Jesus has put a love in our hearts for Israel that is nurtured by the Holy Spirit. We are so thankful that Jesus is our Savior! We long to see Him. The baby in Bethlehem’s manger deserves our loyal devotion. It is a privilege to be in the bride of Christ; to love His relatives; and help them regain their Promised Land. Let us continue to pray for the peace of Jerusalem and look for the coming King of kings to establish the Messianic kingdom in this generation.

The Ruler Goes Forth - Micah 5:2 Pinpoints the Messiah - studytoanswer.net

Marriages Of Boaz And Ruth, Christ And The Church - Calvary Chapel Green Bay