Mysteries of the Star of Bethlehem

"Now after Jesus was born in Bethlehem of Judea in the days of Herod the king, behold, magi from the east arrived in Jerusalem, saying, 'Where is He who has been born King of the Jews? For we saw His star in the east, and have come to worship Him.'" (Matthew 2:1-2)

The star of Bethlehem has always intrigued people. What was it? Could it have been a comet or a meteor or a super-nova? What about a special alignment of planets?

The longevity of the star rules out a comet or a meteor. The star had to appear each night for several months in order to lead the magi all the way from Persia in the Far East. The possibility of a super-nova or a planetary alignment is ruled out by the fact that the star constantly moved, leading the magi first to Jerusalem and then to Bethlehem where the star hovered over the house where Mary and Joseph had moved to with the Christ Child (Matthew 2:9-11).

The renowned Messianic Jewish scholar, Alfred Edersheim, has proposed another solution to the mystery. He points out that the Greek word translated "star" really means "radiance." The "star" could therefore have been what the Jews called the "Shekinah" — that is, a physical manifestation of the glory of God in the form of a supernatural radiance.

The Jews experienced such a phenomenon in the wilderness of Sinai when for 40 years they were led about by a pillar of cloud in the day that became a pillar of fire by night (Exodus 13:21-22). When the radiant cloud moved, they moved. When the cloud hovered, they pitched their tents and settled down (Numbers 9:15-23).

This Shekinah later resided in the Holy of Holies after the Temple of Solomon was built (2 Chronicles 7:1-3). Ezekiel describes how the Shekinah departed from the Temple in stages before God allowed the Temple to be destroyed by the Babylonians. First, the Shekinah moved from the Holy of Holies to the threshold of the Temple (Ezekiel 9:3). Then "the glory of the Lord" moved from the threshold to the Eastern Gate (Ezekiel 10:18-19). Finally, the Lord's presence moved to the Mount of Olives where it "stood over the mountain" before departing the city (Ezekiel 11:23).

The Shekinah is mentioned in the New Testament as being present at the birth of Jesus (Luke 2:9), at His transfiguration (Matthew 17:5), and at His ascension (Acts 1:9).

Considering the radiant and maneuverable qualities of the Shekinah that are demonstrated in these scriptures, I think it is very likely that the "star" which led the magi was really the Shekinah glory of God.

The Attraction of the Star

Another mystery associated with the Bible's account of the magi is why did these men "from the east" follow the heavenly radiance? 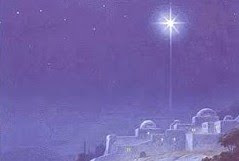 Their very title gives us a clue. Magi is a Persian term for a priestly caste of wise men who specialized in astrology, medicine, and natural science. The ancient historian Herodotus says they interpreted dreams and omens and claimed to have the gift of prophecy. Such men would naturally have been interested in an unusual heavenly radiance.

It is also very likely that they would have been familiar with the writings of Daniel who gained great renown as a wise man and interpreter of dreams in the Persian court of Nebuchadnezzar. If so, they would have known his prophecy of "the seventy weeks of years" which is recorded in Daniel 9:24-27.

This remarkable prophecy established the general time period of the Messiah's coming by indicating it would be 483 years after a Persian ruler issued an edict to rebuild Jerusalem. The magi had probably been counting down the years since the Jews had been sent back from Babylon to rebuild Jerusalem, and they thus knew the general time period when the Messiah would be born.

Because of the Babylonian captivity of the Jews, the magi would also have had access to the writings of Moses (the Torah), and from those writings, they may have come across the Messianic prophecy of Balaam that "a star shall come forth from Jacob" (Numbers 24:17).

The Inclusion of the Gentiles

The final mystery is why God would open the eyes of a group of Gentile mystics and draw them to the Christ Child.

Undoubtedly it was for the purpose of symbolizing the universal importance of the birth, to emphasize that although salvation comes from the Jews (John 4:22), it is intended for all peoples.

That was certainly the message of the angels who proclaimed to the Bethlehem shepherds that their good news of the birth of a Savior was for "all the people" (Luke 2:10-11).

This point was affirmed and emphasized forty days later when Mary and Joseph took their son to the Temple "to present Him to the Lord" (Luke 2:22). As they entered the Temple, a prophet of God by the name of Simeon took the Christ Child into his arms, blessed God, and then announced:

My eyes have seen Your salvation Which You have prepared in the presence of all peoples, A light of salvation to the Gentiles, And the glory of Your people Israel. (Luke 2:30-32)

During the Christmas season as you think about the star of Bethlehem that pointed Mankind to the First Coming of the Messiah, keep in mind that Jesus will soon return as "the bright and morning star" (Revelation 22:16).

What is the Shekinah glory? - GotQuestions.org

What was the star of Bethlehem? - GotQuestions.org

The Star of Bethlehem: A Supernatural Sign in the Heavens? - Answers in Genesis

Mysteries of the Star of Bethlehem: What was it? Comet? Supernova? Alignment of Planets? - Lamb & Lion Ministries

The Case for Christmas: A Journalist Investigates the Identity of the Child in the Manger - Lee Strobel (Book)