In a recent meeting between Israeli Prime Minister Netanyahu and the leaders of the Jewish settler movement, the settlers took the lead in what was described as hard and tense emotionally charged exchanges between the man that they helped get elected and those Jews who now say that they are in an open conflict with their own government. The Jewish settlers have made plans to do everything possible to overthrow the Israeli government order to stop all building in what they call God given land. 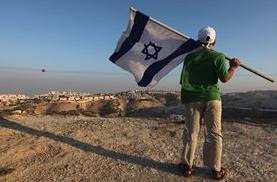 The Israeli government's decision to stop all expansion of the Jewish communities in the Biblical lands of Judea and Samaria are in conflict with not only the Jewish settlers but the Bible itself.

Israeli Prime Minister Netanyahu made what he calls a very hard decision when he announced and then began to implement the moratorium on construction on the Jewish settlements in Israel and thus stopping all expansion of the Jewish communities. Netanyahu explained that this move was to force the Palestinians to come back to the negotiating table and begin work on a peace deal to ensure coexistence of the Israelis and the Palestinians in the Middle East. Meanwhile, the Jewish settlers say that this Israeli government decision will ensure no coexistence between Jews in the Middle East and that the settlers plan to coordinate an attack on this government decision. Prime Minister Netanyahu's decision is, in fact, in conflict with Bible prophecy for the Jewish people in the land of their forefathers.

2500 years ago, the ancient Jewish prophecy Ezekiel wrote that the Lord would find the Jewish people wherever they have been scattered across the four corners of the Earth and bring them back into the land of their forefathers (Ezekiel 34:11-30). Ezekiel 35 refers to the land of the Bible, the land that God promised the Jewish people and 35 times it says that when the Jews come back into the land, the area of Judea and Samaria, that they will prosper, in fact, be better than it was in the times of their forefathers. In fact, the Lord says that He will bring the Jews back into their land not because their Jewish but for His holy name sake (Ezekiel 36:22).

Bible prophecy must be fulfilled.