As the Lisbon Treaty went into force on December 1st, the EU celebrated a new set of rules to put a stop to years of wrangling behind the scenes and additional setbacks that have marked the lengthy process of institutional building in the EU.

The Lisbon Treaty, which embodies most of the failed European Constitution, has as its most prominent innovation the creation of a permanent president and a beefed up foreign policy chief who will lead a new large diplomatic core. 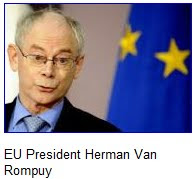 With the Lisbon Treaty now in force in the EU, the stage is set for Bible prophecy to be fulfilled.

Since the signing of the Treaty of Rome by a number of European leaders on March 25, 1957, the European community has evolved into the EU that now has in place a treaty, the Lisbon Treaty, that has become the law of Europe. This tedious process has been the subject of debate over the years, but now the EU can and will become a major economic, political, governmental and military force to be reckoned with on the world stage.

With a gross national product almost twice that of the US, a common currency that is stronger than the US dollar, the EU will play a major role in the global economic crisis and a resolution to that crisis.

This report is almost in lockstep with the revelation in Bible prophecy for the end of days. The ancient Jewish prophet Daniel wrote 2500 years ago that the old Roman Empire would be revived in the last days, Daniel 2 and 7. Though I cannot say that the EU is the actual fulfillment of Daniel's prophecy, I can say that the new EU under the Lisbon Treaty and all that the treaty calls for is at least the infrastructure for the revived Roman Empire. The old Roman Empire had a legislative body, a common currency and a military operation, which is what the EU today either has in place or will have in place in the near future.

With the Lisbon Treaty in force in the EU the stage is set for Bible prophecy to be fulfilled.