“Woe unto them that call evil good, and good evil; that put darkness for light, and light for darkness; that put bitter for sweet, and sweet for bitter!” (Isaiah 5:20)

When news that Israeli Foreign Minister Tzipi Livni might be arrested if she sets foot in England came to light this week, I’d like to say I was shocked. It’s sad when Jew-hatred doesn’t shock, anymore. 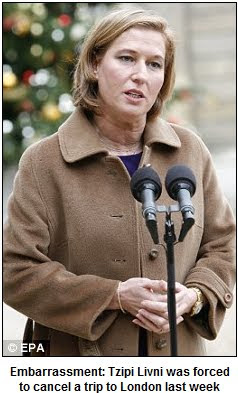 Livni is just one of many Israeli diplomats and officials who are wanted for “war crimes” in certain European countries. The list also includes Ariel Sharon and Ehud Barak.

One can ask the obvious: why can a serial killer like Yasser Arafat be welcomed to give psycho speeches at the U.N., but a stalwart ally risks its diplomats if they go to Europe?

Amazing, isn’t it? People used to know right from wrong. Now we host the Dwarf from Iran on our shores, without arresting him, but Israel’s leaders have to make contingency escape plans if they happen to get too close to, say, Belgium. I guess the Belgians are still frustrated over the Nazi occupation of their country and take it out on the Jews.

It is almost incomprehensible that in our world, leaders from the Jewish state can be arrested and charged with “war crimes.” For example, Sharon was always a target of the lisping, clammy European set that blamed him for Sabra and Shatila (Palestinian refugee camps in Beirut, overrun for massacre by Lebanese militias during Israel’s 1982 invasion of that country).

The Europeans have been the walking dead for a hundred years. Abandoning biblical Christianity — it was getting bad when Spurgeon preached — they have nothing to stand on. Their world view, collectively, is effectively pagan. Therefore, we shouldn’t be shocked at their Jew-hatred; only revolted.

I have long had a theory that what you see in the news today (see War Crimes obsession) is born from what people think about the Bible. You can trace the threats to arrest Israeli officials to…well, even the Enlightenment, which gave rise to Darwinian philosophy. Seriously.

It’s why the British attempt to arrest Israel’s foreign minister, at the same time their historical churches become museums, pubs, or mosques.

When one reads the Old Testament, in all its clarity, one sees as with perfect vision the destiny of the Jews. Good is good, and evil is evil. Unlike our culture, overall, where there is confusion and moral relativism.

It’s precisely why Bible prophecy is so relevant. Isaiah 5:20 is telling us that one day, an inversion of the truth will become the norm. I would argue that that mindset has never been as widespread as it is now.

But we know Who writes History. And He makes a distinction between good and evil.

One day very soon Jews will be able to go anywhere they want, and not be afraid.

Analysis: Most ministers would face arrest in UK - Jerusalem Post

'Virus of abuse' in Britain towards Israel: ambassador - AFP

Israel Angry Over Warrant For Livni - The Bulletin