Cashing in on ObamaCare

As I recently noted in a commentary, the highly-debated healthcare reforms being sought by the Obama administration may, unknowingly and unintentionally, be bringing mankind closer to the prophesied mark of the beast becoming a reality which brings me to the topic of this commentary, namely one of the companies that is profiting most by President Obama's agenda, PositiveID Corporation (formerly VeriChip Corporation). 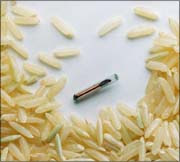 For those unfamiliar with PositiveID Corporation's product, it is an implantable RFID microchip about the size of a grain of rice which has been approved by the Food and Drug Administration for use in humans for medical purposes. Formerly referred to as the VeriChip, this RFID device has been discussed on this site numerous times in the past because of the unique qualities it possesses that bring to mind Revelation 13:16-17, the bible's description of the mark of the beast to come.

And he [the prophesied Antichrist to come] causeth all, both small and great, rich and poor, free and bond, to receive a mark in their right hand, or in their foreheads: And that no man might buy or sell, save he that had the mark, or the name of the beast, or the number of his name (Revelation 13:16-17).

Could the PositiveID implantable microchip be a precursor to the mark of the beast? I don't know but it is implantable which means it could be placed in the right hand or forehead. Not only that, it could serve as a form of identification, which the newly reformed company's title implies is positively where this purported 'medical' technology is headed, no pun intended.

So, how much has VeriChip/PositiveID Corporation stock risen in price during the last six months as a result of ObamaCare having a provision in it that could cause the application of this technology to reach unprecedented heights? A walloping 194.6% according to Fool.com, which bills itself as the world's greatest investing community.

With every passing day it seems another piece of the prophetic jigsaw puzzle becomes a bit easier to slide into place.

What will tomorrow bring? If we are blessed, a shout from heaven!