What is the source of the doomsday date of 2012 that so many are talking about?

The 2012 hysteria has produced a doom boom that has been fueled by a series of television programs and the recent Hollywood blockbuster film.

It all relates to a calendar developed by the ancient Mayan civilization that was centered in the Yucatan Peninsula of Mexico. Their society flourished from about 250 to 900 AD, when it experienced a sudden, unexplained collapse.

The Mayas developed an advanced society that featured large cities built around stepped pyramids that also served as temples. They excelled in mathematics and astronomy. Combining the two, they produced a series of 20 different types of calendars. It would not be an overstatement to say that the Mayas were calendar-obsessed. 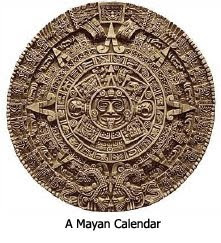 The Long Count Calendar was a measure of "world age cycles" that repeat over and over again. This calendar was divided into five units or cycles that started with the mythical date for the creation of the Mayas — August 11, 3114 BC. The fifth cycle was supposed to end on a date that corresponds to December 21, 2012 on the Gregorian Calendar that is used in the Western World. Since the calendar ends on that date, some modern day interpreters have jumped to the conclusion that it marks the date for the end of the world.

The man who put 2012 on the map as a pivotal date for world history was José Arguelles, a Mexican-American, who authored a mystical book in 1987 titled The Mayan Factor.4 He was also instrumental that year in organizing a worldwide event called the Harmonic Convergence.5 During two days in August, people were urged to gather at sacred sites to awaken the "energy grid" of the world and thus initiate a 25-year era of spiritual growth that would culminate in 2012.

Since that time, a man by the name of Christian John Meoli has been organizing and conducting 2012 conferences that have the flavor of a Star Trek convention. He plans to hold the final conference on December 21, 2012 at the Mayan pyramids in Mexico. He describes 2012 as "the shift,” and the slogan for his conferences is "Shift Happens."6

In the next installment of this 2012 series, we'll look at the apocalyptic factors that are used to substantiate the doomsday date of 2012.