Will We Be Microchipped?

Bible prophecy foretells a time coming in the prophetic future when the prophesied Antichrist is going to cause "all, both small and great, rich and poor, free and bond, to receive a mark in their right hand, or in their foreheads: And that no man might buy or sell, save he that had the mark, or the name of the beast, or the number of his name." (Revelation 13:16-17)

All of us familiar with bible prophecy know what the preceding Scripture specifically refers to, namely the mark of the beast, but do we fully realize that right now, buried within a Democratic party-endorsed bill that most of us overwhelmingly stand in opposition to, the precursor to the mark of the beast, at the very least, may be lurking, largely unseen by the public?

The following is an excerpt from a Canada Free Press article dealing, in part, with ObamaCare and the Democratic Party's greatly sought health care reform bill:

The Obama Health care bill under Class II (Paragraph 1, Section B) specifically includes in its lists of things that must be registered in the NATIONAL MEDICAL DEVICE REGISTRY: ‘‘(ii) a class II device that is implantable.”

Then on page 1004 it describes what the term “data” means in paragraph 1, section B:

‘‘(B) In this paragraph, the term ‘data’ refers to information respecting a device described in paragraph (1), including claims data, patient survey data, standardized analytic files that allow for the pooling and analysis of data from disparate data environments, electronic health records, and any other data deemed appropriate by the Secretary.”

What is meant by the term, “class II device that is implantable”?

According to the FDA, a class II implantable device is a “implantable radiofrequency transponder system for patient identification and health information.” The purpose of a class II device is to collect data in medical patients such as “claims data, patient survey data, standardized analytic files that allow for the pooling and analysis of data from disparate data environments, electronic health records, and any other data deemed appropriate by the Secretary.” In other words an RFID chip such as are used in a number of dogs and cats. Just like Obama’s dogs.

Humans being marked in the manner domestic pets and livestock presently are? That's precisely what bible prophecy seems to foretell coming, does it not? 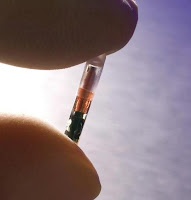 Numerous times in the past I've directed my readers to consider the possibility that the implantable microchip, the VeriChip, could be the prophesied mark of the beast in the making or a precursor to same. The information above does nothing to discredit that possibility. To the contrary, it raises the possibility dramatically, especially when we consider the course VeriChip Corporation recently embarked on.

VeriChip (CHIP), the company that markets a microchip implant that links to your online health records, has acquired Steel Vault (SVUL), a credit monitoring and anti-identity theft company. The combined company will operate under a new name: PositiveID.

The all-stock transaction will leave PositiveID in charge of a burgeoning empire of identity, health and microchip implant businesses that will only encourage its critics. BNET previously noted that some regard the company as part of a prophecy in the Book of Revelation (because the HealthLink chip carries an RFID number that can be used as both money and proof of ID) or as part of President Obama’s secret Nazi plan to enslave America.

Remember when the implantable VeriChip was approved by the FDA in October of 2004, supposedly for use in humans for 'medical' purposes, and critics of my suspicions were laughing at me, as well as others observing current events in light of bible prophecy, for speculating that the VeriChip's applications might be expanded to include mark of the beast-like qualities? I do. The critics aren't laughing now. Well, they may be but they're doing it a lot more quietly, primarily because it looks like the bible prophecy-watching community had a great deal more foresight than they did.

As early as 2005, it was becoming clear the VeriChip implantable microchip was being eyed as attractive to government - and not just to store medical records. In a 2005 commentary, I included a quote of interest indicating that "these types of applications are actually being driven under the U.S. Department of Homeland Security." And no, I didn't make that quote up. I pulled it directly from a story posted on Yahoo Finance's list of business news stories and provided a link to same as verification for my readers to review for themselves. Unfortunately, the link from the 2005 commentary is dead now, as is often the case with news items several years old, but look at where we are now!

The term 'positive identification' is one I'm quite familiar with as a retired police officer with decades of experience. Establishing positive identification is critical in any case where law is going to be enforced, far more so than in any hospital emergency room I'm familiar with! As a police officer, I have seen many an individual transported to the hospital and treated for serious illnesses or injuries without anyone positively knowing who the individuals were. I have not, on the other hand, seen a lot of people go to jail without 'positive ID' having been established beforehand.

Now don't get me wrong! There are any number of circumstances where I've seen an unidentified suspect hauled off to jail and booked as a John Doe for committing a crime, but this is the exception rather than the rule - and by far! Reason? It's a crime in most states to fail to identify one's self to law enforcement if one is being legally detained or arrested by a police officer having probable cause to do so. Not only is it a crime to refuse to be positively identified, it's a major inconvenience for a suspect. Refusing to be identified is a separate criminal offense that only adds to the suspect's troubles. Even more bothersome, one charged with a criminal offense as a John Doe is never granted bail.

What I'm trying to convey here is we may be able to tell a great deal concerning the direction a corporation's technology may be headed based on something as simple as a name change, especially in this case.

From day one I've said that if the implantable microchip is the prophesied mark of the beast in the making, or even a precursor to it, we would begin to see similarities between the two. While the verdict is still out, we know the implantable microchip can serve as a positive identification, can store personal information like medical records, and even be utilized to make a financial transaction. Without drawing any final conclusions, we're getting there, aren't we?

Assume for a moment that the implantation of microchips becomes mandatory in the future, toss in a dictatorial leader who would connect having (or not having) the implant as an indication of where one's political loyalties lie, and make it impossible for one to buy or sell without having the chip and what do you have? I don't know about any of you, but I think you may well have the mark of the beast.