Twenty Years After the Wall Crashed Down

One thousand giant dominoes were toppled in Berlin Monday along the path where the Berlin Wall once stood. German Chancellor Angela Merkel, raised in communist East Germany, stood next to former Soviet President Mikhail Gorbachev as Europe celebrated the fall of the Wall 20 years ago.

"Looking back, we can see many causes that led to the peaceful revolution, but it still remains a miracle," German President Horst Koehler said. 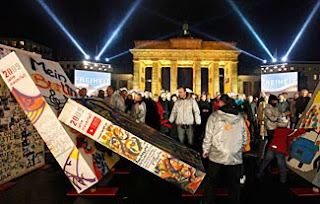 It seems just a short time since we prayed earnestly for our persecuted Christian brothers and sisters behind the Iron Curtain. It seems just a few moments since the doctrine of Mutual Assured Destruction ironically kept the world safe from nuclear war, and Johnny Carson did impressions of Ronald Reagan talking to Gorbachev on the Tonight Show. Yet, 20 years have passed since freedom came to East Germany on November 9, 1989. We now have freshmen in college who have no memory of a time when the harsh fist of communism gripped Eastern Europe. They don't remember the reality of Soviet missiles aimed at American cities, and youngsters in the former Soviet Bloc take freedom of travel for granted. Yet, while Eastern Europe rejoiced in its freedom from communist rule, the road to a free market society has been a rocky, difficult trudge for many of its people.

If you've forgotten, freedom for East Germany actually started in Hungary earlier that autumn. In September of 1989, vacationing East Germans asked to emigrate through Hungary's border, and (on 9/11) Hungary opened their door into Austria. For the first time since the Berlin Wall was built in 1961, East Germans were able to openly escape into the West.

This seemingly small, but massively significant event led almost directly to the fall of the Wall two months later (on 11/9). Erich Honecker, General Secretary of the Socialist Unity Party of Germany, decided to relax travel restrictions and allow East Germans to go in and out of the country in an attempt to keep them from emigrating via Hungary. East Germans poured out of their communist "utopia" by the hundreds of thousands.

Had Gorbachev offered Soviet troops to get things under control, the history of the past two decades might have been different. But Gorbachev offered no such help to rescue communist East Germany. Honecker was forced to resign, and the new leadership opened up the Berlin wall on November 9, 1989. East Berliners took little time to make their exodus to the West, and over the next days and weeks, chunks of the wall were taken as souvenirs. Within a few months, Germany reunification was underway.

Yet, while the Wall fell, things have not gone easily for Germany. Communism took its toll on East Germany, and now 20 years later, the western part of the country is still propping up its re-attached other half. While the people from the East were freed from tyranny and political oppression, their transition to a free market economic system has been slow. From the point of view of West Germans, the fall of the Wall was costly and they were the ones forced to shoulder most of the economic burden. Gunther Bially in Hamburg wrote:

"The government took a little percentage out of our pay checks called the Soli (short for Solidaritätszuschlag). They told us it would be only for two years or so. Twenty years later we still pay the Soli. Every year West Germany pumps some 100 billion euros into East Germany to keep it alive and going. Without our money many parts of East Germany would collapse. There does not seem to be an end to this.

"We don't want to change this historical event. But we have been paying a lot of money for it and will be paying for it without really seeing the financial benefits. Twenty years ago they told us that East Germany would develop into a new oasis with new investments and lots of jobs...I guess it has not so far."

The other nations in the former Soviet bloc have had the same problems. Free elections and the restoration of civil rights and human dignity go a long way, but 20 years after the fall of the old oppressive communist regimes, many older people just wish prices weren't so high. The Czech Republic has gone a long way in transitioning back to a free market system; after all, in 1989 there were still people alive who remembered how life worked before communism. Countries like Bulgaria, though, have had a much harder time.

Petar Stoyanov, Bulgarian president from 1997 until 2002, said low living standards "remain the Achilles' heel of the country's transition" to democracy.

"I never imagined that, 20 years later, there would be so many people, mainly the elderly, who can't afford to buy simple things," he said in an interview with The Washington Times. "None of us understood the destruction we inherited after 45 years of communism," he said. "The idea that you could wait for someone else to do the work had taken away individual creativity and initiative."

Yet, there is hope in the classrooms, as the next generation grows into adulthood. The kids graduating from Bulgarian schools these days were never raised under communism, and they never developed the old, "Let somebody else do all the hard work," attitude. They realize that they can get places by pushing themselves and forging their way in the world. Twenty years after the fall of communism, the old capitalist spirit is rising up in the hearts of the youth, and they offer a great deal of hope for the future of Eastern Europe.

20 years after the Berlin Wall's fall: An East European looks back - The Washington Times