Taking Over the World

"Gee, Brain, what do you want to do tonight?"
"The same thing we do every night, Pinky — try to take over the world!"

The majority of people on the earth want peace and well being for the entirety of mankind. There seems to be a constant problem though; human beings. Yet, despite past dismal results, world nations continue to make efforts to unite on major issues in order to find common ground and make binding international treaties.

The leaders of Iran and Brazil met this week with visions of working-over the international order, and the upcoming meeting at Copenhagen will be another attempt at seeing eye-to-eye on reducing greenhouse emissions. Yet, while recent efforts at global governance have proved weak and unproductive, their very failures may one day turn out to be the impetus for an all-out push for true global "unity".

The representatives of 192 nations will meet in Copenhagen December 7-18 for the United Nations Climate Change Conference. This is the follow-up to the 1997 meeting in Kyoto, Japan that attempted to deal with global climate change. The US Senate never ratified the Kyoto Protocol, which is set to expire in 2012. 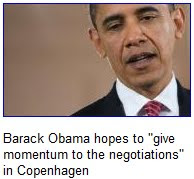 Things do not look so good for the globalists and environmentalists' cause. While the nations of the world may give lip service to lowering carbon dioxide emissions, environmentally friendly technologies are expensive to implement. Getting industrial nations to agree to lower their emissions by 25-40 percent by 2020 (as UN scientists have recommended) during a robust economy would be hard enough, let alone during the current time of belt-tightening. When "green" technologies raise the costs of food and fuel, many countries are going to be hesitant to sign on. Both US President Obama and China's President Hu have pushed for a two-step plan, which means agreeing to emissions reductions this December, but not actually signing anything legal until next year.

Copenhagen also promises to instigate a significant bit of wealth redistribution; sending billions of dollars and machinery from the "have" countries to the "have not" countries in order to help them reach goals of reducing greenhouse emissions.

The US Senate is considering passing a bill to drop emissions 17 percent by 2020. The 2007 Intergovernmental Panel on Climate Change said in 2007 that the Earth had warmed 1.3 degrees Fahrenheit since 1906, and environmental groups argue that the globe will continue to warm 7.2 degrees more by 2100 with catastrophic results.

These predictions would be more frightening if there was a consensus about global climate change and if there had actually been any additional global warming the past few years. But.... temperatures appear to be "hanging," and are not as high as in 2005, in fact. Aside from that, a hacker apparently got into emails from scientists at the Climatic Research Unit which, according to The Times, indicate the following:

British PM Gordon Brown declared last week that Copenhagen must "forge a new international agreement ... which must contain the full range of commitments required: on emissions reductions by both developed and developing countries, on finance and on verification."

Despite Gordon Brown, this next step toward global governance will likely end in failure enveloped in flowery sounding words.

Globalists will not give up, though, and certain world governments don't want them to. Some, like Brazil and Iran, just want to have a significantly bigger cut of the power pie.

During the visit, the two leaders discussed international relations and agreed that the world's order of leadership needed revising. They said the UN was doing a poor job of fixing both political and economic world problems [we don't disagree] and expressed their desire for a new order of things, an order in which all the countries of the world worked together toward eliminating problems.

In other words, they wanted countries like Brazil and Iran to have a greater say in things. In their version of the new world order, the structure of the UN Security Council would look a bit different. Brazil would have a permanent seat, for instance. With veto power.

"Iran and Brazil, due to their rich cultural and humane backgrounds, and their shared viewpoints on international relations, can play active roles in both designing and implementing a justice seeking world order. The current world order is incapable of solving the global crises and the governments should cooperate in order to eliminate the major problems existing in it."

Despite their inefficiency of working together, the governments of the world will come together one day. According to 2 Thessalonians 2:3-4, a world leader will arise who will come across as the greatest thing since apple butter. He will exalt himself above all gods and will call himself God. What's more, everybody on earth will worship him (Rev 13:8), everybody not written in the Book of Life. He won't look evil to the common eye; he won't wear red tights and carry a pitchfork. He'll appear as a great and powerful leader and orator (Rev 13:4,5).

In the meanwhile, we're not to live in fear. We are to trust God, keep working, and keep seeking the Kingdom of God and His righteousness (Matt 6:33, Luke 12:31, 32). The true King of the Universe wins in the end, and under Him we'll truly find peace.

One World Government? Globe May Not Be Big Enough - The Washington Post

Obama to take near-term cut of 17% to Copenhagen - AFP