TEL AVIV – The U.S. is considering adopting a unilateral Palestinian declaration of independence in the West Bank and Jerusalem regardless of negotiations with the Jewish state, according to Israeli sources speaking to Israel's Haaretz newspaper.

WND first reported in September that according to a top Palestinian Authority official, the Obama administration has largely adopted the positions of the PA to create a Palestinian state within two years based on the pre-1967 borders, meaning Israel would retreat from most of the West Bank and eastern sections of Jerusalem.

WND reported that the White House had accepted the positions of Palestinian Prime Minister Salam Fayyad, who had quietly called for a state on the pre-1967 borders within two years. 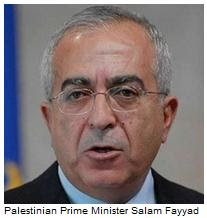 Now Haaretz is quoting reports indicating that Fayyad has reached a secret understanding with the Obama administration over U.S. recognition of an independent Palestinian state.

Haaretz quoted Israeli sources stating Fayyad's plan specifies that at the end of a designated period for bolstering national institutions, the PA, in conjunction with the Arab League, would file a "claim of sovereignty" to the United Nations Security Council and General Assembly over the 1967 borders.

Israeli officials further told Haaretz that Fayyad had boasted of positive meetings about his plan with prominent EU member states, including the United Kingdom, France, Spain and Sweden.

Fayyad also told Israeli officials the Obama administration did not oppose his plan.

Netanyahu reportedly requested the U.S. tell Fayyad that it would not support his proposal and would veto it in the Security Council. Haaretz reported Netanyahu has yet to receive a clear response from Washington on its stance on Fayyad's plan.

'Obama can create headache for Netanyahu'

A top PA official told WND in September that the Obama administration told the PA it will support the announcement of a Palestinian state within two years.

The official also said Obama had accepted the PA position that Israeli-Palestinian negotiations begin where they left off under Prime Minister Ehud Olmert, who went further than previous Israeli leaders in his concessions to the Palestinians.

"We understand from the U.S. that the Netanyahu government is not in a position to go against creating a state within two years," the PA official said.

The official claimed the Obama administration was ready to ultimately consider "sanctions" against Israel if the Netanyahu government rejected negotiations leading to a Palestinian state. The official refused to clarify which sanctions he was referring to or whether he was specifically told by the U.S. government it would consider sanctions.

Obama can make a "headache" for Netanyahu if the Israeli leader does not conduct negotiations leading within two years to a Palestinian state, the PA official claimed.