The YNetNews website is reporting that Russia has suddenly changed political course and vows to "quickly" complete Iran's first nuclear power plant at Bushehr. The Russians, who had been under pressured by the US and Israel to slowdown on construction in order to give diplomatic talks and the hope that Iran would abandon their nuclear program a chance to bear fruit, seem to have changed their mind and have set a March 2010 date for completion of the new Iranian nuclear power plant. It is noteworthy that Russia had just been in the news the other day for being legally "threatened" by Iran for not completing the nuclear facility on time. The Iranians remained defiant and upset that their nuclear program was not being built on time. The Iranians had increased their rhetoric and now we see the Russians getting "off the fence" to finish the nuclear program for Iran. The YNetNews article reported:

The reported statement, which did not give a specific time for the launch of Bushehr, came as Iran's government announced plans to build 10 new uranium enrichment plants, in a major expansion of its disputed nuclear program.

It appears that another YNetNews article gave a March 2010 date that the Russians are supposedly aiming for in completing the Iranian Bushehr nuclear power plant. This article reported:

Russia plans to start up the nuclear reactor at Iran's Bushehr power plant in March 2010 to coincide with the Iranian New Year, two sources closely involved with the project told Reuters.

"We have been given the task of launching the plant by Iranian New Year," said one of the sources. "There is still a lot of work to do."

As many of you will recall, we have seen over the past few weeks an effort by Iran to pressure Russia into completing their nuclear facilities as well as pressure Russia into fulfilling their contractual obligations for delivering the advanced S-300 anti-aircraft missile defense system. The Russians have either been persuaded to increase cooperation due to the Iranian "threats" or they have reached a "sweeter deal" with the Iranians as news surfaced recently that Iran has approved the construction of 10 additional uranium enrichment facilities. It is no doubt that Russia is eyeing this "business" opportunity and may have gotten off the fence and back to work for Iran in order to be awarded the contracts for the 10 additional facilities. 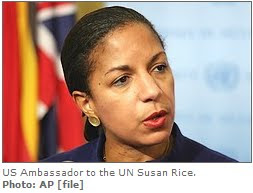 The US ambassador to the United Nations on Monday called Iran's plans to build an additional 10 uranium enrichment plants "unacceptable," warning they could bring increased international pressure on Teheran.

"We view the Iranian announcement, if it is in fact accurate and implemented, that they intend to build 10 additional facilities as completely inappropriate and further isolating Iran from the international community," Rice told reporters at UN headquarters.

As we can see from the comments above, Iran's announcement to build an additional 10 enrichment plants brought a swift condemnation from the US and the rest of the international community. This announcement was probably meant as a "slap in the face" to the international community who has so far not lifted a finger to stop the Iranians. The French for their part said:

In other news, Hezbollah leader Sheikh Hassan Nasrallah said that the militant terrorist group would continue to fight Israel and it had determined that "armed resistance" was the only way to return land to the Arabs. The Jerusalem Post article reported:

Hizbullah will improve its weapons capabilities to face off any Israeli threat, the group's leader Sheikh Hassan Nasrallah's said Monday, adding that armed struggle was the only way to regain "Arab lands" captured by Israel.

Nasrallah's remarks signaled the group has no intention of meeting a United Nations resolution requiring it to give up its weapons.

Nasrallah gave no details on the weapons plans, but Hizbullah has said it has tens of thousands of rockets.

For the Israeli's part, they have acknowledged that the Hizbollah terrorists have increased their arms supplies and can now hit virtually any location within the state of Israel, including Tel Aviv. This buildup and any conflict that arises afterwards will definitely result in an escalation of fatalities and damage within Israel. It is my guess that such destruction would be met with a "gloves off" response from the IDF. The Jerusalem Post article reported:

The IDF contends that since the Second Lebanon War, Hizbullah has tripled its prewar arsenal to more than 40,000 rockets, some of which can strike virtually anywhere in Israel - a dramatic improvement over the short-range missiles fired in the 2006 conflict.

Nasrallah said the buildup was necessary. "The continuation of Israeli threats against Lebanon...force the resistance to seek more power in order to improve its capabilities," Nasrallah told reporters via video link from a secret location.

His comments came during a news conference to announce the group's new political manifesto, the second such manifesto since Hizbullah was founded in 1982.

Hezbollah leader Hassan Nasrallah asserted on Monday that the use of violence was the most effective way to end Israel's occupation of Arab lands, amid criticism in Lebanon of his militant organization's refusal to disarm.

"The history of the Arab-Israeli conflict proves that armed struggle and military resistance is the best way of ending the occupation," he told journalists in south Beirut via a video feed. 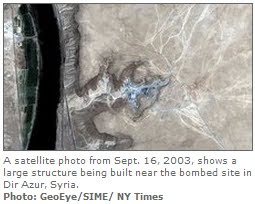 In one more piece of disturbing news, it is being reported that the IAEA has visited the suspected Syrian nuclear facility in the remote eastern Syrian city of Dir a-Zur. This is the same facility in which Israel destroyed at the end of 2007. The Jerusalem Post reports:

IAEA inspectors have visited the suspected nuclear facility in the remote eastern Syrian city of Dir a-Zur and retrieved samples from the site in order to determine the source of uranium traces found there, Qatari newspaper al-Watan reported on Monday.

In November, it was reported that inspectors who visited the site - in ruins since 2007 - found traces of highly processed plutonium, indicating that Syria's nuclear program was further along than was previously assessed.

The facility, named al-Kibar, was demolished in September 2007, allegedly by IAF fighter jets.

...According to the al-Watan report, it now claims the uranium found at al-Kibar was left there by Israel.

Syria's leadership "assessed that the source of the uranium is tactical nuclear bombs dropped by Israel during its attack on the facility," Al-Watan quoted two Syrian sources as saying.

"This is a clear example of international hypocrisy. After all, international bodies estimate that Israel possesses an arsenal of over 200 nuclear warheads," they said, expressing outrage over the lack of scrutiny of Israel's alleged nuclear facilities by the IAEA.

A report by the nuclear watchdog, however, refuted the Syrian claims, stating that the uranium found in Dir a-Zur was a significant discovery.

The sources further stated that Damascus "gave the delegation all the information it requested and answered all questions posed by its members."

Al-Watan reported that the inspectors also visited a nuclear site near Damascus, which was built in cooperation with the IAEA.

As we can see from these reports, the enemies of Israel continue to plot and plan the demise of the state of Israel. In Psalm 83 we are told by the Psalmist that:

Psa 83:1 Keep not thou silence, O God: hold not thy peace, and be not still, O God.
Psa 83:2 For, lo, thine enemies make a tumult: and they that hate thee have lifted up the head.
Psa 83:3 They have taken crafty counsel against thy people, and consulted against thy hidden ones.
Psa 83:4 They have said, Come, and let us cut them off from [being] a nation; that the name of Israel may be no more in remembrance.
Psa 83:5 For they have consulted together with one consent: they are confederate against thee:

As we can see, this certainly sounds like the situation we are seeing played out in the Middle East today. While Israel continues to try to put forth a genuine and good faith effort to achieve peace with her neighbors, her enemies in fact continue to plot and plan her destruction. It is in times like this when it is apparent that there is only one person who can solve this Middle East problem. And that is the Lord Jesus Christ.

But in the meantime, we are very likely to see the playing out of the prophetic word as Israel's enemies will have to learn the hard way that the promises made by God to his chosen people will not be broken. And that all of those who come against Jerusalem (and Israel) here in these last days will be smashed to pieces. Let us pray for the peace of Jerusalem and that the Lord's Will be done in these last days. The deception and hatred is so great in the region, it has blinded many. Come soon Lord Jesus and put an end to this destruction and evil so that your Holy name is magnified and glorified among the world. Amen!!