Once again, US President Barack Obama has demonstrated his intention of "putting light" between America and Israel. His hostility toward Prime Minister Binyamin Netanyahu during the latter's visit to Washington this week was breathtaking.

It isn't every day that you can see an American president leaving the prime minister of an allied government twisting in the wind for weeks before deciding to grant him an audience at the White House. 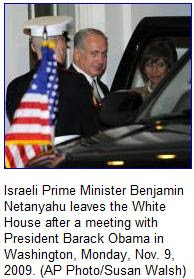 It isn't every day that a visiting leader from a strategically vital US ally is brought into the White House in an unmarked van in the middle of the night rather than greeted like a friend at the front door; is forbidden to have his picture taken with the president; is forced to leave the White House alone, through a side exit; and is ordered to keep the contents of his meeting with the president secret.

Ahead of Obama's meeting with Netanyahu, The Wall Street Journal reported that Obama was effectively attempting to blackmail the Israeli premier by conditioning the meeting on Netanyahu's willingness to make tangible concessions to the Palestinians during his speech before the General Assembly of the Jewish Federations of North America.

Obama's hostility was evident as well during his meeting with 50 Jewish leaders at the White House this week. In an obvious bid to split American Jewry away from Israel, Obama refused to discuss Israel or Iran with the concerned American Jewish leaders. As far as Obama was concerned, all they deserved from him was a primer on the brilliance of his economic policies and the worthiness of his plan to socialize the American healthcare industry. His foreign policy is none of their business.

Obama's meeting with American Jewish leaders was supposed to be a consolation prize for American Jews after Obama canceled his first public address to American Jews since taking office. The White House claimed that he canceled the speech because his visit to the Fort Hood memorial service made it impossible for him to attend. But then the conference was a three-day affair. The organizers would probably have been happy to reschedule.

Instead, as Iran races to the nuclear finish line, America's Jewish leaders were forced to sit through White House Chief of Staff Rahm Emmanuel's kitschy Borscht Belt schmooze about his bar mitzva.

The ironic thing about Obama's nastiness toward Netanyahu and his arrogant treatment of the American Jewish community is that while it has made him the first US president to have no credibility among Israelis and has caused a 14 percent drop in his support among American Jews, it has failed utterly to earn him the trust of the Muslim world.

Today the Fatah movement is in disarray. Last week its leader, Mahmoud Abbas, announced his intention to retire and has placed the blame for his decision on the Obama administration as well as on Israel. Key Palestinian spokesmen like Saeb Erekat have declared the death of the peace process and called for the renewal of the jihad against Israel.

As for the larger Muslim world, a report this week in The New York Times stated that the US's key Arab allies, Egypt and Saudi Arabia, have been perilously weakened since Obama took office. Their diminished influence has been accompanied by the rapid rise of Iran and Syria. Both of these rogue states have been on the receiving end of continuous wooing by Obama administration officials who seem ready to do just about anything to appease them.

In the meantime, Iran's Hizbullah proxy in Lebanon has again managed to regain control over Lebanon's government, despite its defeat in June's parliamentary election. Making full use of the fact that it fields the most powerful army in the country and owing as well to the US's decision to abandon the pro-Western March 14 movement in favor of an approach that makes no distinction between America's friends and foes in Lebanon, Hizbullah strong-armed its way back to the driver's seat in the new Lebanese government.

As for Hizbullah's Iranian bosses, far from convincing them to moderate their policies, the Obama administration's efforts to appease the ayatollahs have emboldened Iran's theocratic leaders to adopt ever-more radical positions against the US. As senior US officials try to make light of the fact that in the past week Iran has thrice rejected their latest offer to have the US, Russia and France enrich uranium for them, the Iranians announced that they will try three hapless American hikers for espionage. The three young Americans were abducted by Iranian security forces along the Iran-Iraq border in Kurdistan four months ago.

The fact that Obama's policies have all failed so spectacularly presents a unique opportunity for Israel to move its policies in a bold new direction. Many commentators and policy-makers have claimed that it falls on Israel to help Obama succeed where he has failed. In their view, Israel must go out of its way to establish a Palestinian state during Obama's term of office or accept the blame for any renewal of the Palestinian terror war against it. Such voices - most strongly represented this week by French Foreign Minister Bernard Kouchner and New York Times columnist Thomas Friedman - have tried to blame the failure of Obama's attempt to reinstate negotiations between Israel and the Palestinians on Israel's alleged intransigence.

In response to these allegations, this week Netanyahu expressed profound and urgent interest in holding negotiations with Abbas. This move was ill-advised. Although it is true that by proclaiming his devotion to the so-called peace process, Netanyahu was able to deflect some of the White House's attacks against him, the short-term advantage it brought him this week in Washington is eclipsed by the long-term damage such an approach causes the country. In the long-run, Israel is harmed when its leaders promote the fiction that it is possible to reach an accord with the Palestinians that will bring about the formal and peaceful establishment of a Palestinian state.

As Netanyahu prepared to fly off to Washington, Abbas made clear that he will not make any concessions to Israel for peace. Together with his fellow Fatah members, Abbas made clear that like Hamas, Fatah does not recognize Israel's right to exist, does not support peaceful coexistence with Israel, and shares Hamas's dedication to continued war against Israel.

For their part, pro-Palestinian lobbyists Robert Malley and Hussein Agha are now arguing that the two-state solution has failed and that the time has come for a one-state solution in which Israel ceases to exist as a Jewish state by accepting the Palestinians as full citizens in one binational state.

The Israeli Left, as well as the State Department and several European governments, has now embraced the unelected Palestinian Prime Minister Salaam Fayad's plan to unilaterally declare Palestinian independence in Judea, Samaria, Gaza and Jerusalem in two years. The aim of the Fayad plan is to coerce Israel into abandoning all the lands it took control over during the Six Day War, by implicitly threatening to deploy international forces throughout "Palestine" that will be charged with "protecting" the new Palestinian state from the IDF.

Both the Fayad-plan supporters and the one-state solution crowd believe that their plans can indirectly advance the so-called peace process. In their view, frightened of both a unilateral Palestinian declaration of independence and of a binational state, Netanyahu will abandon his demand for a demilitarized Palestinian state and for defensible borders for Israel and voluntarily withdraw the IDF and the 250,000 Jewish residents of Judea and Samaria to within the 1949 armistice lines. But the fact is that there is no reason for Netanyahu to fear their plans. Indeed it is high time for Israel to call their bluffs.

The shocking truth is that the demographic threat is an empty threat. The demographic doomsday scenarios for Israel are all based on falsified Palestinian census data from 1997 that inflated the number of Palestinians in Israel, Judea, Samaria and Gaza by 50%. As the independent American-Israel Demographic Research Group demonstrated in early 2005, Israel has no reason to be concerned that by maintaining its control over Judea and Samaria, it will become a majority Arab state. Today, the combined population of Israel and Judea and Samaria leaves Jews with a two-thirds majority. With Jewish immigration and fertility rates rising, negative Arab immigration rates, and decreasing Arab fertility rates, the long-term projections for Israel's demographic viability are all positive.

As Netanyahu knows, there is consensus support among Israelis for his plan to ensure that the country retains defensible borders in perpetuity. This involves establishing permanent Israeli control over the Jordan Valley and the large Jewish population blocs in Judea and Samaria. In light of the well-recognized failure of the two-state solution, Hamas's takeover of Gaza and the disintegration of Fatah accompanied by the shattering of the myth of Fatah moderation, Israel should strike out on a new course and work toward the integration of Judea and Samaria, including its Palestinian population, into Israeli society. In the first instance, this will require the implementation of Israeli law in the Jordan Valley and the large settlement blocs.

Replacing the military government in these areas with Israel's more liberal legal code will also advance Netanyahu's economic peace plan, which envisions expanding the Palestinian economy in Judea and Samaria by among other things reintegrating it into Israel's booming economy. This plan would reward political moderation while marginalizing terrorists in Palestinian society. In so doing, it will advance the cause of peaceful coexistence over the long-term far better than the failed two-state solution. Far from engendering peace, the two-state paradigm empowered the most corrupt and violent actors in Palestinian society, at the expense of its most productive and moderate citizens.

Obama's disgraceful treatment of Israel and, for that matter, his atrocious treatment of the majority of America's allies in the Middle East and throughout the world, has strengthened the hands of America's worst enemies and made the world a much more dangerous place. But his obvious failures provide Israel with an opportunity to take control of events and change the situation for the betterment of Israel and the Palestinians alike.

Applying Israeli law to the Jordan Valley and the major Israeli population blocs in Judea and Samaria will probably not win Netanyahu many friends in the Obama White House. But if we learned anything from Obama's insulting treatment of Netanyahu and American Jews this week, we learned that regardless of what Israel does, the Obama administration has no interest in being his friend.

Palestinians Worry About 'Next Round' Of Leadership - Gant Media