"President Obama should not interfere with the rights of the Jewish people to live in Jerusalem," said Likud Knesset Member Danny Danon. "This ... is a racist demand, saying that Jews cannot live in Jerusalem, only Arabs."

"Our duty is to the nation that chose to deepen the settlement across Judea and Samaria, and of course Jerusalem. We will fulfill that duty, even at the cost of ignoring Obama and his advisers."

The Knesset member was speaking at a groundbreaking ceremony initiating 124 new apartments in a Jewish housing complex in the eastern section of Jerusalem. 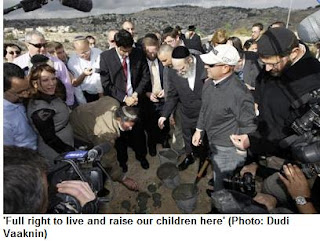 In a separate statement, he told WND "the answer to Obama's racist request not to permit Jewish building in Jerusalem was given today when we initiated the construction of another Jewish neighborhood in Nof Zion (eastern Jerusalem)."

"The people in Israel are united behind Netanyahu's position regarding eternal rights of Jews to build and live in Jerusalem," he added.

Danon's strong words came shortly after Obama stated in a Fox News interview today that settlement activity in Jerusalem and the West Bank complicated efforts by his administration to re-launch Israeli-Palestinian negotiations while it also embitters the Palestinians.

Obama was responding to a plan to build new homes within a Jerusalem neighborhood called Gilo, where already some 40,000 Israelis live.

White House Press Secretary Robert Gibbs said in a statement that "at a time when we are working to re-launch negotiations, these actions make it more difficult for our efforts to succeed."

Netanyahu's office responded to Obama's criticism by dispatching an aide who sent reporters a message calling the building plan in Gilo "a routine process."

The aide explained that like other foreign leaders, Netanyahu does not normally review municipal building plans in local neighborhoods. The aide added that Netanyahu saw Gilo as "an integral part of Jerusalem."

"Construction in Gilo has taken place regularly for dozens of years and there is nothing new about the current planning and construction," the aide added.

Obama had demanded a complete halt to Jewish construction in the strategic West Bank and eastern sections of Jerusalem, which Netanyahu publicly has refused. Palestinians routinely build in those territories, and at times the construction takes place illegally on Jewish-owned land.

Earlier this month, Secretary of State Hillary Clinton said in Jerusalem that a settlement freeze should not be a precondition for re-launching stalled talks with the Palestinians. However, WND reported the Palestinian Authority rejected a proposal by Clinton for Israel to largely scale back Jewish construction in exchange for the resumption of talks.