Cartooning the Word - R. Crumb’s “The Book of Genesis”

In all likelihood, most people would never even imagine a cartoon version of Genesis. Nevertheless, the cartoon version has arrived, and it is attracting no small amount of attention.

The Book of Genesis Illustrated is by famed cartoonist R. Crumb. Famous among cartoonists for his work as far back as the 1960s, Crumb has always combined cartoons and a social/political agenda. As David Colton of USA Today explains, Crumb is known for "subversive, turn-of-the-century linework, untamed libido, and obsessive social commentary."

Indeed, Crumb personally attributes aspects of his style to experiences with LSD in his younger years. He became known for his "Keep on Truckin'" and "Fritz the Cat" cartoons. Disillusioned with the United States, Crumb took his family to France, where they now live. 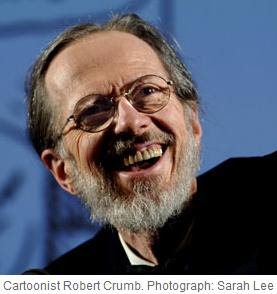 Somewhere along the way, Crumb decided to take on the Bible, starting with Genesis. That is no small ambition. But why?

Crumb seems attracted to the book of Genesis as a collection of narratives with deep influence in Western culture.

"I'm a spiritual guy," he told USA Today. "I'm not an atheist, more an agnostic. I don't doubt the existence of God. I just don't know quite what God is. It's a question that will challenge me until the day I die."

As for the Bible, Crumb does not take it as the Word of God. He said,

In other comments about the project, Crumb has been a bit more forceful. He told Peter Aspden of the Financial Times that working on the Genesis project "nearly killed me." Working through Genesis "ruined my health. I'm in recovery."

He also spoke straightforwardly about his view of the Bible:

"I am completely sick of the Bible. I began to hate it as I worked on it. I've had my fill. The idea that millions of people have taken it so seriously - it is totally nuts. The human race is crazy."

His Genesis project did not lead him to admire the Bible.

"It had the opposite effect on me. . . . I saw what a primitive, backward morality I had to deal with. It was a good way of exorcising the power of the Bible."

Crumb's distinctive cartoon style plays out across the Genesis narratives. The front cover of the book promises "nothing left out." Very little is. Readers will find cartoon depictions of everything from Creation and the Fall to the curse of Onan. Reading The Book of Genesis Illustrated does reveal the power of this artistic expression (as in the sacrifice if Isaac), but mostly its severe limitations.

Christians coming across the Crumb project may wonder what to think. After all, this is a project that is attracting significant attention. Millions of Americans buy comics and pay close attention to the world of cartooning. Crumb's new work has gained the attention of the nation's major newspapers and the digital world.

For one thing, Crumb's work reminds us that God gave us words, not images, as His means of revelation. The prohibition against images is not just a divine preference, it is a command. Looking at Crumb's work makes the force of this prohibition all the more clear. Crumb interprets (or misinterprets) with every image and characterization. His style dominates the narrative - which is precisely the danger. And Crumb insists that he tried his best to restrain himself.

"I'm not ridiculing it, just illustrating the exact words that are there."

Another key insight from the project is this: The Bible always demands a judgment of the reader. The Bible cannot be read simply as literature of historical importance. Any reader sees it as far more than that. In fact, the Bible presents such straightforward claims about both God and humanity that it is either loved or hated, seen as the Word of God or as a poisonous chronicle of the human religious imagination.

In that respect, Crumb's declarations about the Bible make more sense. His experience of drawing the narratives from Genesis led him to hate the Bible. He is offended that so many millions have taken it seriously.

"To take this as a sacred text, or Word of God or something to live by, is kind of crazy," he told David Colton. "So much of it makes no sense. To think of all the fighting and killing that's gone on over this book, it just became to me a colossal absurdity. That's probably the most profound moment I've had - the absurdity of it all."

R. Crumb reveals a great deal about himself in this project. His project also reveals once again why God gave us words, and not images. Crumb's newest work may be described as a triumph of the human imagination - and that is precisely the problem.

The Bible always lays claim upon the reader. The Book of Genesis demands a decision. The God who reveals himself in these words is not only the Creator of the cosmos, but the judge of every human soul. Genesis not only begins the Bible, it reminds us of our need for Christ. Every single narrative Crumb depicts finds its ultimate meaning in the atonement accomplished by Jesus Christ.

But that great fact cannot be reduced to a cartoon. It was never meant to be.

Illustrator R. Crumb is drawn to God with his latest project - USA Today

A bad boy and the Good Book - Financial Times

A Biblical Perspective on War - Grace to You (John MacArthur)