White House to Force Americans into Partnership with Darkness

The man who occupies the Oval Office has announced that American taxpayers will foot the bill of up to $150 million for Muslim majority countries to have a "transformational impact in these regions such as technology, education, telecom, media, business services and financial technology and clean-tech." The White House says that this fulfills a promise made during the June 4th Cairo speech to Muslims to "launch a new fund to support technological development in Muslim-majority countries." And like the billions the US and other countries have poured into the Palestinian Authority for the same purposes, how much of it will support terrorism and the terrorist infrastructure? 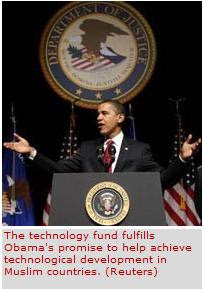 At a time when unemployment in this nation is reaching 10% and the number of those who have given up trying to find a job is far higher, the White House is trying to create jobs within the Muslim community in oil-rich, cash-rich Islamic nations. At a time when separation of church and state is the battle cry among socialists, the White House is making an exception to give hard-earned taxpayer dollars to Islam. Does this mean that it truly doesn't believe Islam is a religion, or does it mean that there is no regard whatsoever for Christians in America who are faced with no jobs and a record $1.4 trillion deficit? Americans should be outraged by this White House announcement.

The only technology Americans know of Islam is its ability to make and improve methods of killing innocent people - roadside bombs, suicide bombs, car bombs and more. The education Islamic nations are providing is the type taught by institutions like the Islamic Saudi Academy in Alexandria, Va - teaching jihad, Jews are monkeys, and hate toward the infidels. Telecom might involve using cell phones to blow up suicide bombs; media might be supporting the type of reporting done by al Jazeera. Are American taxpayers to pay for business services development such as prostitution, drugs, human trafficking and mercenaries? Are these funds going to be managed by Sharia Law investment firms?

If the Administration is so dead set on helping the poor Muslims, why not allocate money that will save souls and promote peace? Ministry to Muslims, for example, is a Christian outreach to the Islamic community. Redeemer International School of Ministry has an outreach in Ghana, West Africa to train up pastors to enter rural areas and minister Christ to Muslims. There are countless opportunities to introduce Muslims to the way of peace and eternal prosperity.

A corrupt body of evildoers at the White House knows the answer, and it is about to force Americans to partner with darkness.

Muslim Questions - questions from Muslims and about Islam - GotQuestions.org