If, to paraphrase Carl von Clausewitz, diplomacy is war by other means, then just as armies are called upon to concentrate their efforts and resources where they can do the most good for their cause, so governments must utilize their diplomatic resources - whether plentiful or scarce - to advance their most important national interests.

Last Friday, the UN Human Rights Council passed a resolution condemning Israel in every possible way for asserting its sovereignty over its capital city and for defending its citizens against wanton, massive, unprovoked and illegal terror from the skies emanating from Hamas-controlled Gaza. The resolution represented a massive achievement for the Palestinians. It referred Israel to the Security Council with the recommendation that Israel's leaders be tried as war criminals before international tribunals. That is, the UNHRC's resolution effectively delegitimized Israel's right to exist by denying that it has a right to defend its territory and its people from illegal aggression carried out by an illegal terrorist organization.

Then on Wednesday, Mohamed ElBaradei, the UN's International Atomic Energy Agency's virulently anti-Israel chairman, announced a deal has been reached between Iran and the US, Russia and France regarding Iran's nuclear program. The deal - which the parties initialized in Geneva after just three days of talks - legitimizes Iran's nuclear weapons program and effectively transforms the US, the EU and Russia into facilitators rather than opponents of that program.

According to news reports of the accord, the US agreed to send American personnel to Iran to upgrade a research reactor in Teheran that was provided to the Shah in the 1960s. Russia agreed to increase enrichment levels of Iranian uranium from their current level of 3.5 percent, to 19.75%. And France agreed to transform the higher-enriched uranium into metallic nuclear fuel.

Until Wednesday, in accordance with three binding UN Security Council resolutions, the US, Russia and the EU refused to accept the legitimacy of Iran's uranium enrichment activities. Their refusal stemmed from the fact that by enriching uranium, Iran stands in breach of its commitments under the Nuclear Non-Proliferation Treaty. Wednesday's accord ignores this inconvenient fact and so whitewashes Iran's illicit behavior, effectively accepting Iran's right to enrich uranium.

And that isn't all. According to Washington Post columnist David Ignatius, by agreeing to enrich Iran's uranium from 3.5%, to 19.75%, the US, Russia and France have provided Iran with a solution to its technical deficiencies. Citing a report in the Nucleonics Week trade journal, Ignatius wrote last week that Iran has apparently been unable to enrich uranium beyond 3.5% and its current "supply of low-enriched uranium... appears to have certain 'impurities' that 'could cause centrifuges to fail' if the Iranians try to boost it to weapons grade." 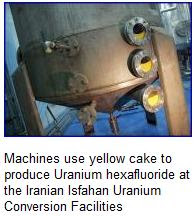 Jack Wakeland, an engineer employed in the nuclear power industry, expanded on Ignatius's revelation at The Intellectual Activist Web site. Wakeland explained that the metallic fuel Iran will receive in this deal "can be converted back to highly purified uranium hexafluoride very, very easily."

That is, the deal allows Iran to surmount the scientific hurdles it reportedly now faces, clearing the mullahs' path to acquiring the weapons-grade uranium.

For their part, the Iranians haven't wasted a moment pushing the diplomatic envelop still further. As the Americans, French and Russians were offering them more than they could have ever imagined possible - including the prospect of US personnel serving as human shields against a possible Israeli air strike on Iran's nuclear installations - back in Teheran they ratcheted up their demands.

"Circumstances may arise under which Iran will require uranium enriched to 63%."

Then on Thursday Iran said it isn't willing to accept a deal that would take all of its enriched uranium out of the country. This is not a deal breaker since the accord the US, France and Russia initialized Wednesday only foresees removing 80% of Iran's known supply of enriched uranium to Russia. But still, it signals that the Iranians have only begun extracting concessions from the Americans and their partners.

And the Americans will no doubt be willing to concede still more. After all, now President Barack Obama can brag that he has an historic, Nobel Peace Prize-worthy deal with Iran. He cannot be expected to give it up just because the Iranians use it as a new path for building nuclear bombs.

Until Wednesday, Israel refrained from publicly attacking the US's decision to seek an accommodation with Iran. This made sense. Israel had no interest in being perceived as pre-judging the outcome of a process on which the Obama administration staked its prestige. But now that the administration has agreed to an accord that effectively transforms America into a facilitator of Iran's nuclear weapons program, the time has come for Israel to start voicing its objections.

Unlike the Palestinians and the Iranians, Israel has no great diplomatic assets. It can assume that it will always be condemned by the UN.

The EU, with its member-nations' own anti-Jewish baggage, a burgeoning and radicalized Muslim minority, and an addiction to Arab oil cannot be expected to stand with Israel.

Western NGOs are largely funded by anti-Israel governments and leftist philanthropists and so use their resources to advance the causes of Israel's enemies.

Under the Obama administration, the US is charting a diplomatic course that places it directly in the anti-Israel camp. Indeed, while the US voted against the UNHRC's resolution against Israel last week, it made no significant effort to convince other countries to follow suit and had no problem with Britain's and France's decision not to cast a vote despite the dangerous precedent the Goldstone Report and the UNHRC's resolution set for US forces fighting terrorist foes in Iraq, Afghanistan and throughout the world. Worse still, the US has refused to announce whether it will use its Security Council veto to block a referral of Israel's military and political leaders to the International Criminal Court.

In the current climate, Israel's diplomatic resources are limited to popular opinion in the US, and shared interests on specific issues with a number of governments throughout the world. In light of Israel's diplomatic assets, Foreign Minister Avigdor Lieberman, who in recent months has been traveling the globe to cultivate bilateral ties with countries in South America, Africa, Central Asia, and Central Europe, should be congratulated for his efforts.

On the public diplomacy front, Prime Minister Binyamin Netanyahu, his cabinet ministers and the Foreign Ministry should use every opportunity to discredit the latest deal with Iran. They should point out its dangers and call for an end to this diplomatic catastrophe before more damage is done to the cause of preventing Iran from acquiring nuclear weapons. Such a campaign would probably fail to derail the current talks. But if successful, it would prevent the deal from being used as a means to delegitimize Israel's right to militarily strike Iran's nuclear installations.

As for the Palestinians' diplomatic triumph with the risible Goldstone Report and its attendant UNHRC resolution, Israel's response to date has been misguided and self-defeating. This week, the government began considering forming a commission of inquiry into the IDF's handling of Operation Cast Lead.

Judge Richard Goldstone has been claiming that if Israel conducts an investigation into his allegations that our soldiers committed war crimes and crimes against humanity, Israel can avoid prosecution of IDF personnel at the International Criminal Court. Lawyers like Attorney-General Menahem Mazuz have latched onto Goldstone's statements and the media are atwitter with rumors that Netanyahu may agree to form such a commission.

That would be a wrong move for several reasons. First of all, Goldstone is in no position to negotiate. Once he submitted his libelous report to the UNHRC, Goldstone's writ of authority was a thing of the past. Even if he now wants to get Israel off the hook he placed it on, he has no power to do so. And the officials at the UNHRC who gave Goldstone the mission of proclaiming that the IDF committed crimes against humanity have no interest whatsoever in crediting any internal Israeli investigation or ending the organization's hounding of the Jewish state.

Beyond that, any investigation Israel could launch into the IDF's conduct of Operation Cast Lead would be perceived internationally as an admission of guilt. If that commission were to conclude truthfully that the IDF conducted its operations in full accordance with international law, its findings would be dismissed as a whitewash.

In response to the UNHRC resolution and the Goldstone Report itself, the government announced this week that it will seek changes in international law to strengthen the ability of democracies to fight against terrorism. This move is also deeply misguided. The fact of the matter is that Israel did not break international law in Operation Cast Lead. It is simply the victim of its enemies' cynical use of the rhetoric of international law as part of their diplomatic war against Israel. That is, the problem is not the law. It is the law's distortion for political purposes by Israel's diplomatically powerful foes. By announcing that it plans to work to change the law, the government missed this central point.

Moreover, by ignoring the fact that the problem is not with the law itself but rather with the distortion of international law by hostile actors for political gain, the government failed to recognize that even if it succeeds in changing the law, in all likelihood the new law will be similarly distorted by its enemies to advance their political war against Israel.

For that matter, the government's very announcement that it wishes to change international law will be pounced upon by its enemies as proof that it broke the law.

Israel's enemies are making adept use of their vast diplomatic power to advance their most important goals. Israel should use its meager diplomatic powers to do the same by going on a public diplomacy offensive against the criminalization of Israel and against the international community's surrender to Iran. A good first step in that direction would be to stop using our limited powers in a manner that expands our enemies' advantages over us.

U.S. expects Iran's response on nuclear fuel no later than next week - Xinhua