Pope Benedict has approved a new church provision that will allow non-Catholics and in particular, the Anglicans, to convert to Catholicism while at the same time, maintaining many of their distinctive spiritual and liturgical traditions.

The Vatican made this decision in response to the disillusionment of some Anglicans over the election of openly gay bishops and the blessing of same sex marriage which has caused a major uproar in the Anglican church not only in England, but across the world.

This never-before provision for Protestants to become a part of the Catholic Church has many Protestant leaders concerned about the breakdown in doctrinal differences between the Catholics and Protestants that came out of the Reformation 500 years ago. 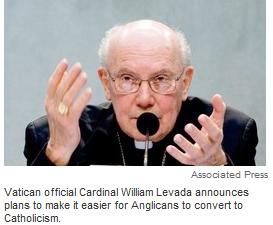 The announcement by the Vatican in Rome that the Pope has approved a church provision that will allow non-Catholics to convert to Catholicism is setting the stage for Bible prophecy to be fulfilled.

In response to the outcry by the Church of England, the Anglicans, about women bishops, openly gay bishops and gay unions, the Vatican has made a way to accommodate these disgruntled Protestants. This Vatican accommodation to Protestants has Protestant Church leaders preparing to see a flow of new converts to Catholicism and its liturgical pattern of worship especially in light of the growth of the emerging church philosophy.

Revelation 17 predicts a worldwide church will be in operation during the seven year period of judgment found in Bible prophecy and known as the Tribulation. In the first 3 1/2 years of this time in the future, this one-world religion will be headquartered in a seven-hilled city, Revelation 17:9 and that city would be the city of Rome, the location of the Vatican. This mother-son cult first established in Babylon 4,500 years ago, Genesis 11:4b, has survived history and will play a major role in the last days.

This announcement from Pope Benedict at the Vatican is indeed setting the stage for Bible prophecy to be fulfilled.

What is the whore of Babylon / mystery Babylon? - GotQuestions.org

A Woman Rides the Beast: The Roman Catholic Church and the Last Days - Dave Hunt (Book)