That they have broken up several major jihad plots in recent weeks is a tribute to American intelligence gathering and law enforcement. To them must go the credit for the fact that the U.S. is not this week picking up the pieces after another major terror attack.

Yet just as Islamic terrorists appear to be ramping up their efforts within the United States, at the UN a new report recommends not the strengthening, but the repeal of counterterrorism laws.

In a bizarre report to the UN Human Rights Council, ostensibly on counterterrorism but actually more intent on social engineering, a Finnish law professor who is a special reporter to the UNHRC, Martin Scheinin, examines what he calls the “complex relationship between gender equality and countering terrorism.” 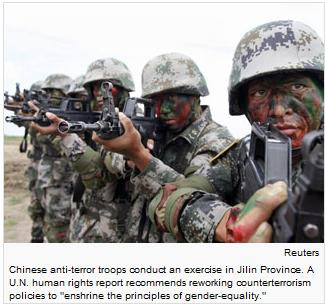 What does working for “gender equality” have to do with resisting Islamic jihad terrorism? Nothing whatsoever, but Scheinin is determined to change that. He calls on UN member states to “abandon the ‘war paradigm’” and instead “enshrine the principles of gender-equality and non-discrimination in the design and implementation of all counterterrorism measures.” He demanded that the American “war on terror” be “actually responsive to the concerns of women, lesbian, gay, bisexual, transgender and intersex individuals in local contexts.” Instead, apparently, of actually defending Americans from terrorists.

Scheinin also recommended that laws designed to interdict the financing of terror groups be relaxed. Why? To make sure that “safe and effective channels for funding” were available for “organizations devoted to gender equality.” He advocated the repeal of “restrictive immigration controls” that penalize “transgender persons whose personal appearance and data are subject to change.” What does that have to do with terrorism? Why, some jihadists have escaped detection by donning burqas - and Scheinin wants to make that easier. He says that to “focus attention on male bombers who may be dressing as females to avoid scrutiny” runs the risk of making “transgender persons … susceptible to increased harassment and suspicion.”

It would be laughable that any of this would appear in a United Nations report on counterterrorism - if only it weren’t true. Scheinin’s recommendations obviously stem from the assumption that actual terrorism is a fiction, a construct of governments he considers reactionary (principally, no doubt, the administration of George W. Bush). Unfortunately, one group that doesn’t appear to have gotten the message are the Islamic jihadists themselves.

Before the UNHRC follows Scheinin’s recommendations to discard counterterrorism laws in the name of political correctness, it should consider some recent developments in the United States.

Just last week, for example, a Muslim in Boston, Tarek Mehanna, was arrested for plotting to massacre American civilians in a shopping mall, as well as to murder two “members of the executive branch” that law enforcement officials declined to identify.

In recent weeks there have been other plots as well: two Muslims, including an imam, were arrested for their alleged roles in an elaborate plot involving numerous other Muslims in New York City and Denver, who were evidently planning a major jihad attack at a sports stadium. Another Islamic jihadist, Hosam Maher Husein Smadi, was arrested after placing an inert car bomb at a 60-story office tower in downtown Dallas. Yet another jihadist, an American convert calling himself Talib Islam, was arrested for plotting to blow up the Paul Findley Federal Building in Springfield, Illinois.

It would be difficult to find a comparable period since 9/11 in which so many plots have been uncovered around the same time - and this makes Scheinin’s recommendations all the more grotesque. Is this really time to “abandon the ‘war paradigm’”? This is a time, on the contrary, to refine and expand that “war paradigm,” to take into account all the many ways in which Islamic supremacists are attempting to bring elements of Islamic law into Western societies – including those that have no connection to actual terrorism. But the many recent foiled terror plots indicates that the United Nations, if it treats Scheinin’s report seriously at all, is suffering from a severe disconnection from reality.

That disconnect is nothing new, really, when it comes to the United Nations. But in this case even more than usual, lives are at stake.