Diplomatic relations between Israel and Turkey took a nose-dive last week, after Turkish Prime Minister Recep Tayyip Erdogan unexpectedly cancelled Israel's participation in a planned NATO air exercise. Despite having a majority Muslim population, Turkey has traditionally enjoyed good relations with the Jewish state, and has tried to bolster its image as being a cultural bridge linking East and West. The Turkish army has fiercely guarded their country's secular government, and has often overthrown those which have sought to turn the nation into an Islamic state. But in 2002 the Islamic based Justice and Development party took power, and since then Turkey's relations with Israel have deteriorated.

During the World Economic Forum in Switzerland, Prime Minister Erdogan had an angry exchange with Israeli President Shimon Peres, stating that,

The incident of which he speaks was later discovered to have been caused by a Palestinian landmine, buried in the sand to try and prevent an IDF invasion of Gaza by sea.

Last week the Prime Minister snubbed Israel by cancelling its participation in the joint air exercise, claiming that Turkey was simply responding to "diplomatic sensitivities" in the wake of Operation Cast Lead, and that this decision was made by the Turkish people. 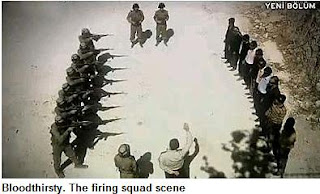 And now the Turkish media has begun broadcasting a controversial new drama which depicts IDF soldiers killing Palestinian children and executing others in scenes reminiscent of Nazi Germany...

One of the shots also depicts a group of Palestinians facing an IDF firing squad.

According to the show's website, it "brings to life the bleeding wound of Palestine. The show depicts all sides of the generations-long tragedy... This season focuses on the women and children and the Palestinian story, as well as the notion that the ultimate solution is love, compassion and world peace."

This week the Turkish Prime Minister sent a delegation to Syria to discuss strengthening military co-operation between the two countries. So it seems that rather than being a mediator for peace in the Middle East, Turkey is now being drawn into an unholy alliance with Israel's enemies. The Magog war, as depicted in Ezekiel 38-39, seems to mention Turkey as being one of those nations which is to invade Israel during the later days.

And I will turn thee back, and put hooks into thy jaws, and I will bring thee forth, and all thine army, horses and horsemen, all of them clothed with all sorts of armour, even a great company with bucklers and shields, all of them handling swords: Persia, Ethiopia, and Libya with them; all of them with shield and helmet: Gomer, and all his bands; the house of Togarmah of the north quarters, and all his bands: and many people with thee. (Ezekiel 38:4-6)

Persia is of course now known as Iran. Ethiopia, or Cush as it was known in the Old Testament, once occupied much of the territory now called Sudan. Gomer was the progenitor of the Cimmerians, who once inhabited the region north of the Black Sea, in modern day Russia and Ukraine. And Togarmah, who was a son of Gomer (Genesis 10:3), settled in what is now known as eastern Turkey.

It's easy to see how all these countries could form an alliance against Israel in the last days. Most of these nations are now dominated by a religion which calls for the extermination of the Jewish people. And those that aren't dominated by Islam, such as Russia, have strong economic and military ties to states that do. It's hard to believe that these military alliances were described for us in the Scriptures over 2500 years ago. That's over 1000 years before the religion of Islam even existed. The predictions have proved to be 100% accurate, because it is the Word of a God who knows the end from the beginning. And He wrote these things for us, not for evil, but for our own good. He has told us these things because He loves us, and He has a plan for this world, and for your life too. He has told us these things so that we would know He is God, and that His Word is true.

Do you believe that Jesus is the Messiah, the Son of God? Have you trusted in Him for the forgiveness of your sins? He gave His life on the cross so that you might be forgiven, and might live forever with Him. Turn away from your sins, and trust in the Lord Jesus Christ for salvation today. He will not turn you away.

That if thou shalt confess with thy mouth the Lord Jesus, and shalt believe in thine heart that God hath raised him from the dead, thou shalt be saved. (Romans 10:9)

Turkey’s strained relations with Israel a cause for concern - Jweekly.com