I took note last week of a very interesting news tidbit from eastern Europe: Turkey and Armenia are poised to sign a treaty.

This is extraordinary, given the genocide unleashed on the Armenians during World War I; they have not forgotten.

Yet here we have this large country and her small neighbor willing to sit at a negotiating table. Who was one of the key facilitators? Why, Hillary Clinton, of course. In fact, as emotions over the century old genocide bubbled up, our secretary of state broke in and appealed to the broader aim of a signed treaty. In other words, Turkey doesn’t have to apologize for the massacres — we just need to get with the peace program and form alliances.

(I find it supremely ironic that Turkey’s mass killing of Armenians during the Great War contributed to the strategy of the allies to break the Ottoman-Turkish empire, thus ending its control over Jerusalem. In a few short decades, the way was paved for the state of Israel.)

I consider this pact significant, because old enemies are now coming together for a murky common “good.” I personally believe that one of those “goods” is the coming alliance against Israel, and specifically, Jerusalem.

The prophet Zechariah’s prophecies concerning the end, and the international attack on Jerusalem, didn’t make complete sense to many, even Bible scholars, for a long time. The international community was too fractured, for too long, to mount any kind of alliance against a small Middle Eastern country. For one thing, the technology didn’t exist to bring about real globalism. Also, regional or international superpowers kept such alliances at bay.

Now, with only a single fading superpower in our world today, alliance strategies are forming. Most have a common denominator: displeasure with Israel. Somehow, just as in Nazi Germany, the Jews are responsible for the ills in our world. Eyes from all directions are literally turning toward Jerusalem.

A Jerusalem Post piece recently discussed how the Palestinians are making some type of permanent settlement virtually impossible (okay, totally impossible). The Arabs have a vested interest in creating unrest in the region until they achieve their maximum goal: the destruction of Israel by war or demographic means. A bi-national state, such an insane thought only a few short years ago, is being bandied about. And don’t forget, only a few short decades ago, a Palestinian state was crazy talk to all but a few academics and politicians. Now it is mainstream.

Yet the Palestinian Authority, along with kindred spirits Hamas and Hezbollah, are clearly undermining peace efforts. 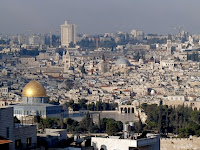 The crown jewel in all this intrigue of course, is Jerusalem itself. For at least 30 years, the international community has resented Israel’s control over the Holy City. Because they do not embrace a biblical world view, the nations demand that Israel cede control of at least half of the city to the Palestinians. This is heating-up, my friends, and I maintain that it is a key piece in the end-times puzzle.

Benjamin Netanyahu has just declared in the Knesset that Israel’s right to defense is “under assault.” This is extraordinary, and unprecedented. The international noose is tightening around Israel.

Now, at the same time, it is my personal belief that a spiritual darkness is spreading over our world; certainly this is the case in the U.S. I see the two linked, because Zechariah indicates that Israel will be totally alone in the end, from a national alliance standpoint. I am stating the obvious in saying that Barack Obama is no friend of Israel. He has very little biblical world view, and his intense pressures on Israel, especially behind the scenes I’m told, are withering.

How sad we’ve come to this, but my friends, there is glory in these dark days, because our faith is being tested and refined. A dear friend who never asks for help just emailed me about his wife’s health and some financial pressures they are under. This is a godly man who loves the Lord and loves Israel.

We must lift each other up and we must look eastward, toward that real City on a Hill, Jerusalem, where our redemption is drawing nigh.

A very close friend and I were talking this week; he is a very solid, discerning guy. He told me that he senses a real turning away from Israel by individuals and churches. Sadly, I agree with him.

It is coming. I feel it, and you feel it. Global alliances are forming, even between bitter enemies. When Turkey and Armenia sign a pact, you know the Battle for Jerusalem is not far off.

Let us pray fervently for Israel, the Jews, and for ourselves. Let us bind each other up in prayer and exhort the remnant of believers to stand. Darkness and light are swirling around us, and we are about to find out what we really believe.

Thank you, Lord, for allowing us to see these days. Come quickly. Amen.