Once again the Norwegian Nobel Committee has surprised the world with its Peace Prize Award by granting it to President Barack Obama. Keep in mind this is the same group that gave the award to Al Gore in 2007 and Jimmy Carter in 2002.

What was Al Gore’s accomplishment? The production of a documentary film that propagandized the myth that global warming is due to carbon emissions. Big deal! 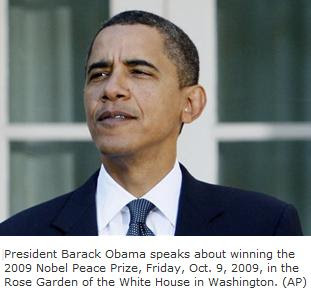 And Jimmy Carter? Well, the worst president of the 20th Century distinguished himself as a rabid anti-Semite, a vociferous America-basher, and a gushing tyrant-lover.

And then, of course, there was the worst Nobel Peace Prize of all of them — the one awarded in 1994 to the world’s leading terrorist, Yassar Arafat, a modern-day Hitler. When that occurred, I lost all respect for the Nobel Committee and their meaningless prize.

So, why would the Committee award President Obama the Peace Prize when he has been in office only nine months and has no notable accomplishments on the international scene? There are several reasons:

But his day of reckoning is coming. His terrible mis-management of our economy will catch up with him as unemployment continues to mount and the dollar continues its dive in value. Most important, he is going to suffer the wrath of God on the international scene due to his mis-treatment of Israel.

In short, we are headed for disaster on both the national and international scenes, so the President had better enjoy the world’s spotlight now before all the lights go out.