Jesus Is the Punch Line … Again

A friend of mine frequently gathers information on the Internet regarding attacks on Jesus Christ in the modern culture. It is really quite amazing what is out there: from Jesus on the Cross dress-up dolls to "Jesus Was Queer" posters to videos such as "Rock Me, Sexy Jesus." (There is also quite a bit that I couldn't even begin to describe in this column.)

In these instances we see that it has become fashionable in our so-called culture of diversity to assail Jesus and those who follow Him. 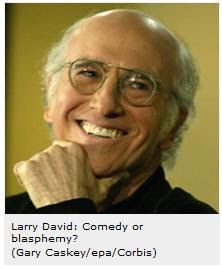 The most recent example came this week on the HBO broadcast of "Curb Your Enthusiasm" in which the character of Larry (apparently a semi-fictional character played by "Seinfeld" co-creator Larry David) desecrates a painting of Jesus, thereby triggering an assumption by two women that the painting is miraculously crying.

In a statement to FoxNews.com, HBO said of the episode,

"Larry David makes fun of everyone, most especially himself. The humor is always playful and certainly never malicious."

Maybe there's no maliciousness in the presentation, but can't those who run the networks see that it is Christ and Christianity that are so often the target of such jokes? In the spirit of diversity that the left frequently touts, I wonder if HBO would try broadcasting a similar story line with a character desecrating a portrait of Muhammad or Martin Luther King or Mother Teresa. I think we know the answer.

We saw a few years ago on Comedy Central's "South Park" that the network permitted a scatological-themed episode to include a depiction of Jesus, but not Muhammad. The message: Jesus is fair game for ridicule, but Muhammad is not.

I noted in an earlier column that these media strikes against Christianity go hand-in-hand with the contemporary effort to cleanse the public square of Christian imagery. I believe our nation is at a genuine cultural crossroads, and our side is not winning.

Some are calling for an apology from "Curb Your Enthusiasm" producers, but instead I am calling attention to this incident in order to further my assertion that it is time for Christians everywhere to realize what is happening in our nation. It is time that we begin to take a stand in our churches, in our homes and in the public square.

This Christ-as-punch-line strategy should inflame within us a zeal to work together as His followers to call America back to God. Of course, that means that the effort against us will likely swell even more. However, we're in good company, because Jesus tells us that the world hated Him before it hated us (John 15:19).

My friends, I would greatly prefer being hated by the world for loving the Jesus of the Bible than being loved by the world for compromising His words. We might as well get used to the fact that when we stand with Him, we will be detested and the brunt of jokes. Nevertheless, let us work hand in hand as never before to proclaim the love and grace of Jesus Christ to our nation that constantly condemns Him and treats Him as a punch line.

Witness to the Deity of Christ - Grace to You (John MacArthur)

Is Jesus God? Did Jesus ever claim to be God? - GotQuestions.org

The Case for Christ: A Journalist's Personal Investigation of the Evidence for Jesus - Lee Strobel (Book)