In 20 minutes at the Intercontinental Hotel in New York City where Iran's infamous president, Mahmoud Ahmadinejad, stayed during the U.N. General Assembly, six Revolutionary Guard diplomats responded to my question, "How will you avoid an attack upon your nuclear reactors, especially in view of President Ahmadinejad's belligerence at the U.N.?"

In my conversation with the Iranian diplomats, the men made it quite clear Iran had nothing to fear. They said there would not be an attack. "Israel is bluffing," confidently averred one of the men.

"There is absolutely nothing for us to concern ourselves with because neither Israel nor the United States tried to save its ally, the shah. They could have with their military, but were too weak to do it. If you think either one will go to war with us, I can tell you, it will never happen."

He went on to say that stringent sanctions, including an oil embargo imposed by the West or an attack by Israel or the U.S., would serve only to unite the people behind Ahmadinejad, who has been under attack since the mullahs in Iran confirmed his re-election earlier this year.

These men consider President Obama just another Jimmy Carter who would never attack Iran. They believe he is already losing two wars on their borders – Iraq and Afghanistan – and would not dare instigate a third – especially a war that could mean a 10-year ground offensive with the probability of over one-quarter million body bags. 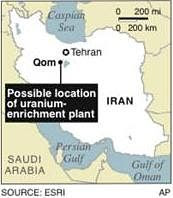 Ahmadinejad's bravado suffered a major blow, however, when it was disclosed last Friday that Iran had constructed a secret uranium enrichment facility near its holiest city, Qom. Unfortunately, the powers-that-be had failed to inform the U.N. International Atomic Energy Agency. The disclosure prompted the U.S., Britain, France, Russia, China and Germany to schedule a meeting Thursday in Geneva to discuss Iran's rogue nuclear program.

With Obama's efforts to promote sanctions against Iran, the round-the-clock security council meetings and America's first official confrontation with the Persian Gulf country since the days of Jimmy Carter, it seems that Iran would do everything conceivable to placate the West. Instead, last Sunday Iran test-fired three short-range missiles with a range of 90-100 miles as part of a military exercise. On Monday, it tested two-stage, long-range Sejil-2 missiles and Shahab-3 missiles capable of hitting Israel, most Arab states, Southern Europe and any location from which an attack on Iran might be launched.

The newest revelation of the secret reactor has destroyed Obama's ability to engage Iran in meaningful dialogue. The Iranians do not fear President Obama's sanctions. They do not believe that Russia and China will agree to more stringent restrictions.

Russia, a country that has balked at imposing strong sanctions against its neighbor, is now expressing concern about the missile tests and might be persuaded to approve some additional moves. China, however, has much to lose if it joins the West in sanctioning Iran. This year alone, China National Petroleum inked a $5 billion contract to expand Iran's South Pars natural gas field; was asked to bid on a $42.8 billion project to construct seven new oil refineries, as well as a 1,000-plus-mile pipeline across Iran; and agreed to increase two other refineries to the tune of $3 billion.

Ahmadinejad seems confident that the sanctions will not undermine his government; he is selling the country to the Revolutionary Guard. On Sunday, the day of the first missile tests, the Revolutionary Guard purchased more than 50 percent of Iran's tele-communications company, one of the nation's largest conglomerates, in a $7.8 billion deal. It has been awarded more than 750 oil and gas construction contracts and has its own port in Iran.

Ahmadinejad believes that sanctions only serve to toughen his countrymen and make them more "self-sufficient." He could be proven wrong, however, as the loss of capital that would result from such a restrictive move could create havoc in Iran's banking system. It could possibly deliver the final blow to his still-tottering regime. The Revolutionary Guard diplomats reiterated that not even the candidates who ran against Ahmadinejad supported renewed unilateral restrictions on the nuclear program.

It seems obvious that the world is threatened by Iran's resolve to possess an atomic bomb. It would seem equally evident that global measures could and should be initiated to stop the radical Islamic Republic from achieving its purpose, now rather than later.