May 22 is now officially "Harvey Milk Day" in California. Governor Arnold Schwarzenegger signed a bill Sunday to give credit to the first openly gay man elected to office in the state by causing California school children to celebrate his birthday every year. Milk is only the 2nd man in The Golden State, after naturalist John Muir, to get a day dedicated to his honor.

Tens of thousands of people from both sides of the issue contacted the governor's staff regarding this controversial bill. Conservative groups had rallied without success to persuade the governor to veto the bill as he did last year. New attention drawn to Harvey Milk by the Oscar-winning movie and plenty of pressure from GLTB activist groups apparently changed Schwarzenegger's mind, however.

Harvey Milk Day will not be a state holiday; banks will be open and the kids will still have to go to school. In their classrooms on that day, according to the new law, teachers will offer lessons "remembering the life of Harvey Milk, recognizing his accomplishments and familiarizing pupils with the contributions he made to this state." In other words, Harvey Milk's homosexual activism gets to be celebrated by an entire day set up in his honor, while thousands of other historically significant Californians are comparatively ignored.

Geoff Kors, executive director of the huge gay-rights organization Equality California, has said his group would develop curriculum for schools and teachers to use on Milk's birthday.

"This will go a long way to better inform Californians as to the nature of the civil rights struggle in the LGBT community." 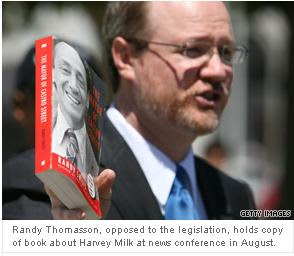 Randy Thomasson, president of Campaign for Children and Families, was not so jubilant.

"Under SB 572, schoolchildren could perform mock gay weddings, have cross-dressing contests, and have gay-pride parades right on campus. Why? Because ‘Harvey Milk Gay Day' pressures schools to make children honor and support anything and everything that Milk believed in. The sky is the limit. And there's no parental consent in the bill."

No matter what Californians may believe about GLTB attraction or rights, Harvey Milk was a painfully poor person to teach unsuspecting school kids to honor. The real Harvey Milk was a guy with a bad temper, who freely had sex with teenagers and, according to his biographer, "had a penchant for young waifs with substance abuse problems." The movie about Harvey Milk also conveniently leaves out the fact that Milk was a big supporter of Jim Jones – that same Jim Jones, leader of Peoples Temple, who led over 900 people to their poisoned Kool-Aid deaths in Guyana merely nine days before Milk was slain.

According to Daniel J Flynn in City Journal:

"Milk occasionally spoke at Jones's San Francisco–based headquarters, promoted Jones through his newspaper columns, and defended the Peoples Temple from its growing legion of critics. Jones provided conscripted ‘volunteers' for Milk's campaigns to distribute leaflets by the tens of thousands. Milk returned the favor by abusing his position of public trust on behalf of Jones's criminal endeavors."

Milk also willingly used deceit to move himself forward politically. In his last campaign, Milk's camera store was bombed with low-grade explosives. Milk blamed the bombing on his political enemies, but biographer Randy Shilts notes that,

"Years later friends hinted broadly that Harvey had more than a little foreknowledge that the explosions would happen."

That is, the bombs were a set up. "You gotta realize the campaign was sort of going slow, and, well . . ." one friend told Shilts.

It is also relevant to note that Milk was not shot to death because he was gay. He was not a martyr for the gay rights cause. Milk was shot because he was in the wrong place at the wrong time after Dan White shot San Francisco Mayor George Moscone. In fact, White's own campaign manager was homosexual and White had donated money to homosexual activist causes.

Yet, Sean Penn's Oscar winning performance has done its job, whether or not that performance truly represented history at all. Harvey Milk Day has been signed into existence, and parents and teachers have a rough job ahead of them. If Harvey Milk is to be commemorated at all, perhaps the full truth about him should be told. If that's not what was intended, then perhaps the governor should be more picky in signing bills to honor any one man.

In addition to the Milk bill, Schwarzenegger signed a bill that expands funding to domestic violence programs aimed at GLTB communities, as well as another Leno bill that allows same-sex couples married before Prop 8 passed to remain "married". Same-sex couples wed out of state who move to California will also keep all their marriage rights except for the name "married".

Coming Out of Homosexuality: New Freedom for Men & Women