“Free to Live and Love as We See Fit?”

The bill, named for two men killed in vicious attacks, extends the definition of federal hates crimes to include attacks "based on a person's race, color, religion, national origin, gender, sexual orientation, gender identity, or mental or physical disability."

Referring to Matthew Shepherd and James Byrd, the President said: 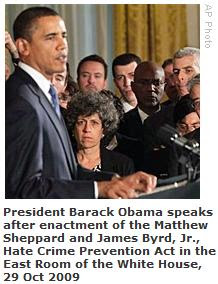 Those words are eloquent in exposing the deep evil that resides in far too many human hearts. If anything, the President spoke too cautiously. It is not only "hard" for any morally sane person to imagine the mentality behind these attacks, it is and must be impossible. Such crimes of violence against any human being should and must be prosecuted to the fullest extent of the law. But defining these crimes as "hate crimes" shifts the legal issue from the criminally violent act itself to the thoughts and intentions of the criminal. This is a dangerous and unnecessary step, for the very idea of a hate crime requires the government to play the role of psychiatrist and also requires a list of those who deserve special protections. How can government stop the extension of that list? If criminalizing hate is legally justifiable, should not every citizen be granted these same protections?

Even more ominously, the logic of hate crime laws inevitably leads to the idea of laws against what is defined as "hate speech." It is not fair to suggest that this specific legislation includes a hate speech provision. It is fair, however, to sound the alarm that very important rights involving the freedom to speak openly against homosexuality, for example, are now at far greater risk.

"This is the culmination of a struggle that has lasted more than a decade. Time and again, we faced opposition," said the President. "Time and again, the measure was defeated or delayed. Time and again we've been reminded of the difficulty of building a nation in which we're all free to live and love as we see fit."

Does President Obama actually mean what he said here? Does he really call for a society "in which we're all free to live and love as we see fit?" The hate crimes bill he signed into law covers gender, gender identity, and sexual orientation. The courts will have to sort out all that is covered in those categories.

We are living in an age increasingly marked by what Sigmund Freud called "polymorphous perversity." I do not believe that President Obama meant to include any and all sexual interests and lifestyles under his blanket category of living and loving "as we see fit." But words really do matter, and this President now bears responsibility for signing a dangerous bill into law and then for compounding that act by using language that was self-congratulatory, dishonest, and dangerous.

In another sense, the President's language was revealing. The logic that leads to the celebration of gay, lesbian, and bisexual relationships cannot stop with those sexual categories. In an age that elevates "consent" as the only meaningful moral and legal issue, any effort to refuse similar recognition to any consensual sexual relationship, lifestyle, or practice is doomed to eventual failure. It is all just a matter of time.

Words From the Fire: Hearing the Voice of God in the 10 Commandments - R. Albert Mohler Jr. (Book)