With the dollar falling rapidly to test – once again – the $1.50/euro benchmark, Harvard University professor Niall Ferguson, the author of "The Ascent of Money," is warning China has begun "dumping the dollar" by buying gold and commodities including oil rights around the world.

With China holding approximately $2 trillion in foreign exchange reserves, the largest amount ever held by a country in the history of international trade, the conventional wisdom in Washington is that China would be committing economic suicide to dump the dollar since approximately 80 percent of China's foreign exchange reserves are held in dollar denominated assets.

But Ferguson called this view "slightly naïve," arguing that the Obama administration is refusing to acknowledge the dollar is "dying a slow death."

"The idea they [the Chinese] don't have anywhere else to go or would shoot themselves in the foot if there were a steep decline in the dollar or appreciation of their currency reassures many people in Washington 'we can relax,'" Ferguson said.

His comments are available in an interview that has been posted online.

This has resulted in massive, but largely unannounced, gold buys undertaken on world gold exchanges by the Chinese central bank.

Hong Kong also announced last month China is pulling all its physical gold holdings from depositories in Great Britain, moving the gold to newly-built vaults near the Hong Kong airport.

Ashraf Laidi, chief market strategist at CMC Markets in London, confirmed the Chinese were buying gold as a hedge against inflation and the weakening dollar, with the increased demand pushing gold to a high last week of $1,013 an ounce, according to the Associated Press.

In an article titled "China alarmed by U.S. money printing," Ambrose Evans-Pritchard wrote in the Telegraph on Sept. 6 that Cheng Siwei, the former vice-chairman of the standing committee and now head of China's green energy drive, said Beijing was dismayed by the Federal Reserve's recourse to "credit easing."

"We hope there will be a change in monetary policy as soon as they have positive growth," Cheng Siwei said at a conference on Italy's Lake Como. "If they [the United States] keep printing money to buy bonds, it will lead to inflation, and after a year or two the dollar will fall hard. Most of our foreign reserves are in U.S. bonds and this is very difficult to change, so we will diversify incremental reserves into euros, yen and other currencies."

"Gold is definitely an alternative, but when we buy, the price goes up," he added. "We have to do it carefully so as not to stimulate the markets."

In an analysis piece, Evans-Pritchard interpreted China's recent moves as putting a "Beijing Put" on gold, meaning that China intended to buy gold when the price goes down.

In effect, a "Beijing Put" will prevent the price of gold from falling much, as long as China stays this course.

Evans-Pritchard concluded that Cheng Siwei's comments "would appear to validate the long-held belief of gold bugs that China has fundamentally lost confidence in the U.S. dollar and is going to shift to a partial gold standard through reserve accumulation."

Noting that China will now begin implementing a systematic policy of buying gold on price dips, Evans-Pritchard said Cheng Siwei's statement "captures exactly what observation of gold price action suggests is happening. Every time it looks as if the bullion market is going to buckle, some big force steps in from the unknown."

"Investors long suspected that it was China," Evans-Pritchard continued. "We later discovered that Beijing had in fact doubled its gold reserves to 1,054 tons. Fait accompli first. Announcement long afterwards."

"China's mercantilist export strategy has led the country into a cul-de-sac," Evans-Prichard concluded. "China must continue to run its trade surplus. It must accumulate hundreds of billions more in reserves. Ergo, it must buy a great deal more gold. Where is the gold to come from?"

The gold is going to come from central bank reserves of nations like the United States, as long as the Obama administration remains in office and federal budget deficits are measured in run-away trillions of dollars.

Red Alert reported just this month that over the past few years, China has invested heavily in Iran's oil and natural gas infrastructure, forming an alliance with the Islamic Republic that is unlikely to be upset by any United States push for increased sanctions designed to curb Iran's nuclear weapons ambitions. 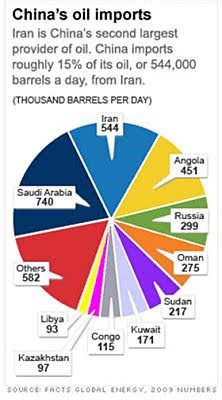 Iran, the world's fourth-largest crude oil exporter, currently supplies China with 15 percent of China's oil imports, according to a CNN report, while state-run Chinese oil companies have deals worth over $100 billion with Iran.

Meanwhile, China is flush with more than $2 trillion in foreign exchange reserves, the most any nation has held in the history of international trade, obtained largely as a result of the United States' large and continuing negative balance of trade incurred as a result of buying cheap Chinese-manufactured goods in the U.S. retail market.

Armed with these resources, China has made a series of investments in oil and natural gas worldwide: At the same time, the Obama administration's ban on the offshore drilling approved at the end of the Bush administration expired on September 21, without any action taken by Interior Secretary Ken Salazar.

Reuters reported that same day Salazar has signaled his department will release its proposal for a new offshore drilling plan "in the next several months."

To date, the Obama administration has made no decision on offshore drilling.