Genetically modified foods have long concerned consumers from many backgrounds, primarily because people fear eating vegetables or grains that have had the genes of other organisms spliced into them. Besides the potential health issues, opponents have worried that GM plants would cross-pollinate with non-GM plants, contaminating local traditional and organic crops. Yet, GM crops are routinely grown across America, and few people even know when they are in fact eating food made from GM plants. In America, a judge has recently ruled that the environmental impact of GM sugar beets must be studied after plaintiffs argued that the genetically modified seed could cause the spread of super-weeds. The debate also continues in New South Wales, Australia, where volunteer GM canola plants have been found growing along the roads.

GM seed giant Monsanto has promoted its lines of seeds across America and the world, offering plant varieties that have been specially designed to resist weed killer. These seeds are not simply the result of careful cross-pollination between different varieties of plants. Rather, they are seeds in which the genes have been selectively spliced and foreign genetic information has been added. Monsanto offers a wide variety of plants that are resistant to glyphosate herbicide, enabling commercial farmers to spray Roundup across their fields to kill weeds without worrying about destroying their crops. American farmers have found the Monsanto seeds handy, but traditional and organic farmers are fearful that the lab-created plants will infect their own crops.

Oregon, United States: On September 21, US District Judge Jeffrey S. White in San Francisco ordered the US Department of Agriculture to more thoroughly investigate the environmental impact of Monsanto Co’s genetically modified sugar beets. Plaintiffs argued that the GM seeds might cross-pollinate with non-GM plants in other fields and contaminate them. Plaintiffs also argued that raising herbicide-resistant plants encourages farmers to add more weed killer to their fields, and therefore could promote the development of “super weeds” that would plague all farmers. 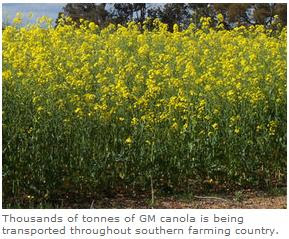 New South Wales, Australia: The controversy has spread across the globe. In Australia, traditional farmers in New South Wales are worried that the genetically altered canola plants in the area will spread into non-GM crops. GM crops make up only about 2-3 percent of the canola production in Australia, yet volunteer GM plants have already started to sprout up along highways.

One farmer named Gai Marshall says she took 20 test kits to test the three-feet tall canola plants growing along a 20 km stretch of the Riverina Highway, and 19 of the plants she tested were genetically modified.

Maharashtra, India: In India, Monsanto’s seeds are actually causing crop failures and suicides. Indian farmers turned to the herbicide resistant seeds to raise cotton, hoping to grow huge cash crops. The GM seeds, though, require significantly more water and pesticides than native crops, and farmers have either had to pay large amounts of money to keep their fields watered or else allow their crops to dry up. Crushed by debt and crop failure, thousands of Indian farmers have committed suicide.

Africa: African farmers have been extremely unwilling to turn to GM plants. Researchers have urged farmers to continue to use the native seed varieties, because traditional seeds are already drought and pest-resistant – which is why they’ve been used in those lands for generations. Genetic diversity among seeds is also important, and farmers are being urged to continue to save and trade seeds among themselves.

Israel: An Israeli crop-protection company Makhteshim-Agan is hoping to compete against GM seed giant Monsanto by producing seeds that are drought and pest resistant, but without adding new genetic material to seeds as Monsanto has done. Instead, Makhteshim-Agan is investing $37 million in the San Diego ag-tech startup Cibus Global, which has developed a Rapid Trait Development System. Cibus can breed plants to have certain desired characteristics in just a few years rather than in centuries.

Despite all this fussing with seed genes, plenty of farmers across the world have been seeking out the old "mutts" of the seed populations. Heirloom seeds from the crops of yesteryear may not produce the biggest tomatoes or the reddest apples, but many consumers consider their produce the best tasting and healthiest. People with organic or backyard gardens have turned to heirloom seeds to grow the same varieties of carrots and onions and potatoes that their great grandparents grew a century ago, and because there are no intellectual rights connected with heirloom seeds, people with heirloom crops are free to save the new seeds from the crops to plant at the next season.