Jihad in New York and Colorado

Details are still emerging, but it seems clear at this point that the extensive jihad terror plot that has been exposed in New York City and Denver this week involved plans to target baseball and football stadiums and New York’s Fashion Week with explosives carried in knapsacks to the detonation point and then detonated remotely - as in Madrid on March 11, 2004, when jihadist bombings killed 191 people and wounded 1,800.

Central to the plot is a young man named Najibullah Zazi, who was initially cooperative with Federal agents until it began to emerge that he had ties to Al-Qaeda. Zazi is in even more hot water after the discovery of bomb-making instructions in his own handwriting.

Zazi offered the improbable explanation that he accidentally downloaded the bomb-making material while downloading what news reports primly referred to as a “religious text.” In keeping with prevailing politically correct sensibilities, no report specified what kind of “religious text” might come with downloadable bomb-making instructions, or said anything about which religion was involved. Reporters were mum about what the adherents of this unnamed religion might be doing to encourage bomb-making, or how they might find justification for such actions in the texts and teachings of that religion.

Just in case anyone on the planet still might not know which religion could be involved in such things, a clue came with the arrest of Ahmad Afzali, an imam who, according to the New York Daily News..., “...became religious in high school, and preached at the Masjid Hazrat Abu Bakr Islamic Center, New York’s largest Afghan mosque, until 2007, when he opened a funeral business.” (Yes, a funeral business.) Before this case broke, the FBI apparently consulted Afzali more than once. Last week he said, “They come for information, and I always help. I have helped them many times.” 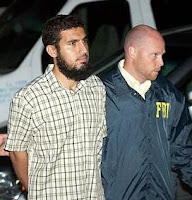 However, Afzali was apparently playing a double game. He called Zazi on September 11, after learning that the young man and his friends were suspected of terrorist activity. “They asked me about you guys,” Afzali told Zazi. “They came to ask me about your characters.” Afzali disclaimed any knowledge of whatever Zazi was doing: “I’m not sure what happened. And I don’t want to know.” Nonetheless, he protected his friend in front of the Feds: “I told them that ‘they are innocent, law abiding.’”

He also told Zazi, “Listen, our phone call is being monitored” (right!) and asked him if there was any “evidence” in Zazi’s rental car, which had been searched by the FBI. And indeed, they found Zazi’s notes about making bombs in the car.

In any case, the idea that an imam could be involved in a terror plot still seems to mystify many Americans. After all, the mainstream media inundated us this past week with warmly effusive stories about Eid al-Fitr festivities in mosques, and none of them contained the slightest hint that anyone in those mosques could or would ever get the idea that waging jihad terror was part of his religious responsibility. Although there is abundant evidence that jihadists use mosques to recruit and motivate terrorists, as well as to plan terrorist activities, non-Muslims are not supposed to notice such things, on pain of charges of “Islamphobia.”

The PC police require us to assume that imams in America never, ever preach the kind of thing imams in Saudi Arabia or Pakistan or Gaza preach - such as the popular Saudi Sheikh Muhammad Saleh Al-Munajjid, who proclaimed several years ago in the mosque in Mecca, Islam’s holiest city, that Muslims must “educate their children to…Jihad and to hatred of the Jews, the Christians, and the infidels.”

The allegations against the imam Ahmad Afzali and his friend Najibullah Zazi demonstrate yet again that the unquestioned and unquestionable assumption that such things are not taught in American mosques is not only unwarranted, but dangerous for national security. It is long past time for a public examination of the foundations of the belief system that serves as the foundation and impetus for jihad terror. Government and law enforcement officials have put off such an examination for eight years and counting - and the longer they continue in this, the more they assure us that this latest jihad bomb plot will be very, very far from the last such plot we see on American soil.

An inside look at the NY terror case - The NEIN Blog (Douglas J. Hagmann)