What is Zbigniew Brzezinski famous for besides having a name difficult to spell and pronounce?

His claim to fame is introducing the nation to an obscure governor from Georgia by the name of Jimmy Carter. Brzezinski was a foreign-policy disciple of Henry Kissinger and assured Americans that Carter was well-versed in geo-politics and would be a safe bet in his challenge to President Gerald Ford.

Brzezinski's payoff after Carter was swept into power was being named national security adviser.

He presided over one foreign-policy fiasco after another – the Soviet invasion of Afghanistan, the Iranian revolution, the U.S. Embassy takeover in Tehran, the failed rescue of the hostages in the embassy and so on.

Now Brzezinski is back with more advice.

He suggests the U.S. military shoot down any Israeli jets headed to attack Iran's nuclear facilities.

What's so bizarre about this advice is that the U.S. has abdicated its own responsibility to protect its own civilians from the strong possibility of a nuclear attack by Iran or its proxy terrorist armies.

Remember, Iran's mullah leadership has long stated their simple view of the world and their enemies: Israel is the "little Satan." America is the "Great Satan." While it's true that Iranian President Mahmoud Ahmadinejad has made clear over and over again his determination to destroy Israel, to wipe it off the face of the earth, many have missed his stated goals of bringing down America as well. 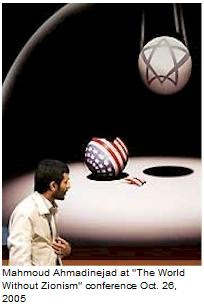 I first reported Ahmadinejad's bigger goal of destroying America in the fall of 2005 when he spoke to a conference in Tehran called "A World Without Zionism." While most of the world media coverage focused on Ahmadinejad's harsh condemnation of Israel, his ultimate goal was in evidence in the backdrop of the event.

It wasn't just a world without Zionism and Israel that Ahmadinejad and his friends in Hamas, Hezbollah, Islamic Jihad and other terrorist groups were envisioning. It was a world without the United States of America.

At the Oct. 26, 2005, Tehran conference, Ahmadinejad was photographed gesticulating at a podium showing the name of the conference. These photos were published worldwide – from Al-Jazeera to the Associated Press.

Shots showing the wider view, however, were only revealed later in my own premium online publication G2 Bulletin. The oversized emblem for the conference shows an hourglass with two balls falling through – one representing the U.S., already cracked and fallen, the second representing Israel.

"Is it possible for us to witness a world without America and Zionism?" he asked. "But you had best know that this slogan and this goal are attainable, and surely can be achieved."

I don't know about you, but I'm convinced Ahmadinejad hasn't changed. I think he represents the view of the ayatollahs who have run Iran since 1979. They don't simply want to destroy Israel. They want to destroy America.

I'm not even sure Iran would ever use nuclear weapons on Israel. If it did, it would surely kill nearly as many Muslims, including some of its closest allies in Hamas and Hezbollah, as Jews.

Of course, if I were the prime minister of Israel, I wouldn't bet my life on that.

But I've always believed Iran wanted nuclear weapons to take on the U.S. – not necessarily to deliver with intercontinental ballistic missiles, but, more likely, on the backs of terrorist mules entering the U.S. covertly or fired from a cheap Scud just offshore and detonated at high altitude, creating a devastating electro-magnetic pulse that could cripple America's infrastructure.

Nevertheless, that's not the way Brzezinski and his fellow globalists see it. They are more concerned that some nation-state is acting in defense of its own citizens and interests without going to the United Nations.

He doesn't want to destroy Iran's nukes. He prefers to shoot down Israeli jets defending their country – and ours.

Iran loses its only AWACS as Ahmadinejad threatens the world - DEBKAfile