Was God in the Whirlwind?

My home state of Minnesota has lots of lakes, bitter cold, and Lutherans. Over 150 years ago, Scandinavians targeted this state and its climate, perhaps because it resembled their homeland. Ironically, the fathers and grandfathers of today's Lutherans left Sweden back then because they saw corruption and bad doctrine within Lutheranism in Scandinavia. But these Lutheran immigrants built Bible-believing churches for future generations. No doubt they would be crushed at such a culmination of apostasy in recent years.

Wednesday, August 19, was an average day. It was cool with not enough humidity to stir up a storm. No unusual weather patterns were forecast in the Twin Cities' metro area. As I was out driving, there were no tornado sirens. It was going to be a memorable day, nonetheless.

During the week, the Evangelical Lutheran Church in America (ELCA) was holding its annual convention in downtown Minneapolis. Attendees were using the facilities of the Minneapolis Convention Center and Central Lutheran Church which is directly across the street. At this year's convention, a blatant pro-homosexual position validating "chaste" same-sex relationships was to be voted on. It was to be voted on at 2 PM on Wednesday, August 19. 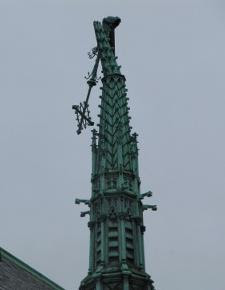 Then for the first time in decades, a tornado touched down in downtown Minneapolis at, you guessed it, 2 pm. The tornado went through the western section of downtown, causing damage to the Central Lutheran Church building, which was being used as a central meeting place for the convention. There was extensive roof damage at the Minneapolis Convention Center where the actual conference was assembled as well as votes on same-sex issues were actually cast. The church steeple on top of Central Lutheran Church was struck and split in two. It was left hanging upside down. The church was built in 1929 and certainly has had no tornado activity near it to date.

Meteorologists agree that such activity in a downtown area is extremely rare. Many could not recall when this had last happened to an area of structural cement rather than suburban homes or rural areas.

The vote was delayed past 2 PM but it did pass that same day. It passed by just one vote and it acknowledged the validity of same-sex relationships that are "chaste, monogamous and lifelong." There was a whirlwind outside of the convention center and inside - to the degree that one person said,

"We trust that the weather is not a commentary on our work."

Conservatives in the ELCA, also observing the weather aberration, said it could have been a warning from God and an expression of His anger.

The ELCA went on to vote two days later to allow homosexuals to serve as pastors. If the tornado was a warning from God - and we don't know that it was, but one could make a case for it - those voting for abomination didn't get the message.

While we have no final word from God as to whether He sent the tornado, we can observe how God treated rebellious people and nations throughout the Old Testament who would not turn away from sin. If God didn't send the whirlwind, He did allow it. A holy God never approves of sanctioning sin and lifestyles that are destructive.

We can be sure of one message, for it is right out of the Bible. A calamity happened near Jerusalem where 18 people were killed. Jesus said,

"Those eighteen on whom the tower in Siloam fell and killed them: do you think that they were worse offenders than all the others who lived in Jerusalem? No, I tell you; but unless you repent, you will all likewise perish" (Luke 13: 4-5).

Apostasy is allowed to remain rampant because the Bible is no longer preached in many churches. The liberal churches have plunging membership and ask why. It should be obvious that at least a remnant is not pleased with letting the world come into the church.

Additionally, churches are not preaching about God's judgment today. Rather, it's the gushy gospel with a God who doesn't hold to biblical standards anymore or else the church has changed the standards. Some would say those standards are outdated. "What would Jesus do?" is a bumper sticker or bracelet but not a guideline for holy living. However, today outfits like the ELCA even twist the words of Jesus. As the saying goes, the Ten Commandments are now the ten suggestions.

Lives were spared in this event, unlike the story in Luke 13. God was gracious. He is infinitely patient. Nonetheless, on a day when no severe weather was predicted or expected, a tornado forms, baffling the weather experts, most saying they've never seen anything like it. It happens right in the heart of the city. As if steered by an unseen hand, it targets a convention center whose occupants are talking about condoning blatant sin. To add emphasis, the hand then causes the tornado to tear into Central Lutheran Church just blocks away. This church was providing alcohol for attendees. Trees and homes just south of the downtown area had some damage.

God's message is repent because none of us will otherwise escape God's judgment. The message in many calamities is to repent while there is still time. I wonder if the ELCA delegates and leaders are even listening.

Since the vote on Friday I have heard from good Lutheran people who plan to leave the ELCA. May their vote with their feet send a message that urges others to follow them. The ELCA is likely not going to change, so lovers of truth and the Bible in all liberal denominations should take a cue from disgusted ELCA members now looking for a new church home.

God's Word cannot be mocked and whether He was in the whirlwind or not, the message is clear. We serve a holy God who does not sanction wickedness.

The Tornado, the Lutherans, and Homosexuality - Desiring God (John Piper)