From 1970 to 1980, Bernardine Dohrn was a terrorist fugitive on the FBI's Ten Most Wanted List. Now she's a law professor at Northwestern University Law School where she teaches a course on law and the Palestinian conflict with Israel.

During her time as co-commander of the Weather Underground terrorist organization with her husband, education professor William Ayres, the group committed some sixteen bombings. Among its targets were the State Department, the New York Queens Courthouse, military recruiting offices in Brooklyn and the home of New York Supreme Court Justice John Murtagh while Murtagh was asleep at home with his wife and children.

Dohrn, her husband and their colleagues emerged from hiding in 1980 when terror charges against them were dropped due to a technicality. None of them ever served hard time for their crimes. Neither Dohrn - whom FBI director J. Edgar Hoover once referred to as "the most dangerous woman in America" - nor Ayres ever expressed the slightest remorse for their actions. 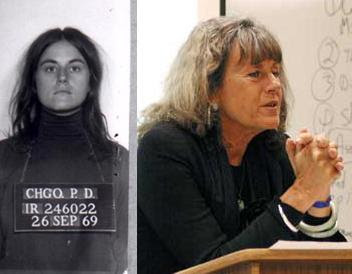 Indeed, in a 1998 interview with ABC News, Dohrn said that looking back on her career as a terrorist, her only regret was that she hadn't committed more attacks. As she put it,

But then, those who cannot do, teach. And now Dohrn is passing on her knowledge of terrorism to a new generation of students through her seminar on Palestinian terrorists.

Dohrn is no newcomer to the subject. In 1974, together with her fellow Weather Underground terrorist colleagues, she published a book called Prairie Fire: The Politics of Revolutionary Anti-Imperialism. As the David Horowitz Freedom Center's Discoverthenetworks.org website makes clear, Prairie Fire was the Weather Underground's declaration of war against the United States. Among other things, it asserts,

"Our intention is to disrupt the empire, to incapacitate it, to put pressure on the cracks, to make it hard to carry out its bloody functioning against the people of the world, to join the world struggle, to attack from the inside."

Dohrn's class is notable because it is likely the only current instance in a U.S. university where a formerly active terrorist is teaching a class about terrorists. But by paying someone like Dohrn to teach a course on terrorists, Northwestern is not pushing the envelope very far along.

In both major and minor universities throughout the U.S., supporters of Palestinian terrorists are teaching American students the history, sociology, politics, law and culture of the Arab and Islamic world's war against Israel. The fact that the narrative they teach has little to no connection to historic truth or to objective, measurable reality is of no interest to anyone.

Actually that is not true. In many cases, the professors who stir up the most controversy for their incendiary support for terrorists and condemnation of Israel and its supporters are of great interest to university administrators. Indeed, they arguably owe their careers to their hostile stance toward Israel.

Case in point is newly tenured Columbia professor Joseph Massad, a little-accomplished professor of Middle East studies whose resume includes no scholarly achievements. Massad rose to prominence with the David Project's 2005 release of its documentary "Columbia Unbecoming" in which Jewish students at Columbia related the intellectual intimidation they suffered in the classroom at the hands of Massad and his colleagues. A university panel formed to investigate the students' allegations found that Massad exceeded "commonly accepted bounds" of behavior in his treatment of one of his students. 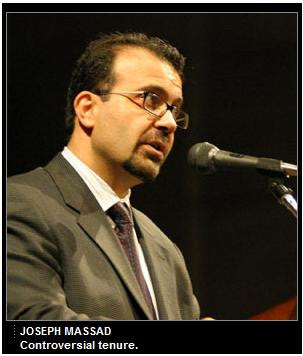 As Jacob Gershman reported in the New York Post in June, Columbia quietly granted Massad tenure earlier this year in a secret procedure that likely was unprecedented in its lack of transparency or justification.

Massad's "academic" achievements to date consist of diatribes against Israel, Jews, gays and feminists. Jews and Israel are guilty of stealing Palestinian land and murdering Palestinians and of being Jewish "Nazis" to the Palestinian "Jews." Homosexuals - whom Massad refers to as "Gay International" - are involved in a nefarious plot to force otherwise happy gays in the Arab world out the closet. And "Imperialist Feminists" are involved in a conspiracy to destroy the Arab way of life by objecting to so-called "honor-killings," which in Massad's view are nothing more than "crimes of passion."

As Gershman reported, Massad was granted tenure this year despite the fact that a tenure panel convened two years ago rejected his tenure application. Apparently, the 2007 tenure committee was unconvinced that Massad's work excusing Arab males for murdering their womenfolk for the "crime" of "dishonoring" them was up to Columbia's traditional academic standards.

The first tenure committee's loyalty to traditional academic standards apparently didn't sit well with Columbia President Lee Bollinger and Provost Alan Brinkley. The two men must have felt that in light of the celebrity Massad brings to the school, Columbia stood to benefit from granting him a lifelong appointment. And so Massad was given an unheard-of second hearing before a different committee this past year.

All of this naturally raises the question of why American universities embrace men and women like Dohrn and Massad. Why do America's greatest institutions of higher learning bend over backward to make terrorists and crackpots, bigots and intellectual pygmies feel welcome to spew their bile in the classroom in front of students whose families pay upwards of $50,000 per year to enroll in their sub-level courses?

The answer, unfortunately, is that in the long history of academia bad scholarship and bad ideas flourish until two conditions are met. First, bad ideas must be so widely discredited that professors become too embarrassed to espouse them openly or associate with colleagues who do. Second, funding must dry up for work in the discredited field for professors to stop engaging in it. The occasions on which both conditions are met are so rare that only one example from the last century comes to mind: eugenics.

Eugenics, the pseudo-science of racial pecking orders, was so much the rage in academic circles from the late 19th century through the 1930s that even a towering liberal figure like Supreme Court Justice Oliver Wendell Holmes believed in it. In 1927 Holmes upheld a Virginia law imposing forcible sterilization of the mentally disabled, arguing that "Three generations of imbeciles is enough."

It took the Holocaust to force American academics to desert their support for eugenics and American financiers to stop endowing professorships and underwriting conferences in the "scientific" quackery they propounded.

We cannot know what it will take for the current fashion of Israel bashing in campus classrooms to be discredited. But we can safely assume that whenever it is finally abandoned, it will be replaced by something equally reprehensible and intellectually dishonest.