Americans across the United States are telling their congressmen that they do not want socialized healthcare. Thousands at town meetings are grilling their Congressmen over socialized medicine and other government takeover programs. The power of the people is being seen. Americans do not want government to play God over their lives, the lives of their children and the lives of generations to come. Constitutional Liberty is at stake and congressmen are finding out that their out of control malfeasance and unconstitutional behavior is finally raising the ire of the countrymen. This is no time to stop, but a time to make your voice heard at every opportunity.

There are YouTube videos posted across the internet where thousands of protesters are standing up for their rights. Smug congressmen and representatives of the White House are receiving a public dressing down over the unconstitutional acts of this brave new socialist government. Standing behind body guards, Secretary of Health and Human Services Kathleen Sebelius and Pennsylvania Democratic Senator Arlen Specter were booed by hundreds when they defended socialized medicine. Specter had the audacity to say that Senators were essentially too busy to read the 1,000 page healthcare bill. Sebelius was booed when she defended the "hardworking Congressmen." 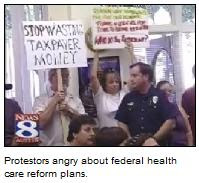 New York Democratic Congressman Tim Bishop was confronted by hundreds who took him to task over socialized healthcare, global warming and other issues. He arrogantly stood before the crowds and held his party line. Texas Democratic Congressman Lloyd Doggett's meeting on socialized medicine was shut down by protesters in Austin. They dogged him until he left town. In response to a constituent's email against socialized medicine, Pennsylvania Democratic Senator Bob Casey did not address one concern, but rather said that the socialized healthcare plan must be passed as soon as possible.

Socialistic arrogance prevails among these elected traitors. The United States government was never set up to be a socialist institution. It has to be "remade" in order for that to happen. Those in Congress and at the White House are usurpers trying to sell socialistic oppression as an inalienable right.

"And for me, that utterance may be given unto me, that I may open my mouth boldly, to make known the mystery of the gospel, for which I am an ambassador in bonds: that therein I may speak boldly, as I ought to speak."

There is only one God and its not government. Speak boldly that the gospel may remain the cornerstone of our free land.

Another Dem shouted down at town hall - Politico