Ayman al Zawahiri, al Qaeda’s #2 behind Osama bin Laden, was featured in a 90-minute interview produced by the terror groups media wing As Sahab. The interview is being touted as a reinforcement of a “conditional truce” initially offered to the U.S. by bin Laden in 2006, although is actually more of an ultimatum rather than a potential peace offering.

Zawahiri reiterated calls for the U.S. to vacate Muslim lands, including Afghanistan and Iraq and called for a release of all Muslim prisoners. During the 90 minute message, Zawahiri also referenced “apostate” Islamic governments and described the nation of Israel a “crime against Muslims” that must be wiped from the map.

Interestingly, Zawahiri cited the change in language from former U.S. President George W. Bush to the words of Barack Hussein Obama, referring to the latter’s speech in Cairo in early June. References to the Cairo speech clearly shows that Zawahiri is in a position to follow current geopolitical events despite the $25 million bounty placed on him by the United States. 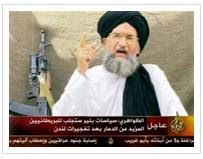 There are two aspects of this video that have eluded current news reports. The first and perhaps most curious is the conspicuous absence of Osama bin Laden, considering that it is ostensibly bin Laden’s conditions that form the basis for this truce and Zawahiri’s latest message. We have not seen any proof of life from bin Laden since at least 2004.

Secondly, one may look to the so-called truce offered to Europe in 2004 by al Qaeda, which was followed by attacks shortly thereafter. By superimposing this historical template over today’s current geopolitical events, including what might be considered as a growing desperation within al Qaeda due to the successes of sustained U.S. air strikes and significant victories, the message could be viewed as a warning for strikes against the West.

In any case, the “new” message from Zawahiri appears to be a recycling of “old” demands by the de facto leader of al Qaeda. Perhaps intelligence analysis should focus on the Islamic government that is harboring Zawahiri and facilitating his propaganda efforts.

"I know only one organization that has made terrorism the main tool of solving political problems. It is the Russian special services.… At the special department of the KGB they trained terrorists from practically every country in the world…. The bloodiest terrorists in the world were or are agents of the KGB-FSB…. I can definitely say that the center of global terrorism is not in Iraq, Iran, Afghanistan or the Chechen Republic. The terrorist infection is spread worldwide from Lubyanka Square and the Kremlin cabinet. And until the Russian special services are outlawed, dispersed and condemned, the terrorism will never stop: bombs will blow up and blood will be shed…. Yuri Andropov, Vladimir Putin, Nikolay Patrushev and others — these people are the main terrorists.... And until we condemn them ... global terrorism will continue."

The "Axis of Evil" is alive and well. It's headquarters has always been in Moscow and terrorism has always been its primary tactic. So when Ayman al-Zawahri is seen in a video speaking his usual terrorist rhetoric we should know Vladimir Putin and his communist and Islamic minions are in lip-sync with every syllable.

Zawahri: Israel must be wiped off map - Jerusalem Post