Ever since World War II, the U.S. dollar has been the king of currencies. America has had a beautiful relationship with its global trade partners. They send us goods and services, and we send them financial instruments in the form of Treasury bills, bonds, and plain old cash.

In recent months, the world has finally realized that America is a debtor nation, funding its standard of living through an endless issuance of debt securities. The wake-up call was certainly the sub-prime financial meltdown. Easy credit, much of it from abroad, created an equity bubble that nearly drove every major bank in America into bankruptcy. The need for bailout and stimulus money caused the U.S. budget deficit to zoom to $1.8 trillion for this fiscal year.

China has made a series of attacks on the dollar. It was one of the first nations to call for a new global currency.

"We should have a better system for reserve currency issuance and regulation, so that we can maintain relative stability of major reserve currencies exchange rates and promote a diversified and rational international reserve currency system,” said Mr. Dai, according to the Chinese foreign ministry.

The Chinese have a good reason to be worried about the value of the dollar. They hold nearly $2 trillion of foreign debt, the bulk of which is denominated in dollars. When Hillary Clinton recently paid a visit to China, she got an ear full from Beijing leaders about their displeasure with the U.S. government's huge deficits and the Federal Reserve's easy monetary policy.

The Chinese have not stopped buying America's debt. Beijing realizes their economic and political stability is linked to the dollar. All those Chinese goods have to be bought by someone.

One possible solution to the problem is to diversify the global currency system away from the dollar. The European euro is a leading candidate. There is also talk of a “new world currency” that is based on a mix of currencies that would be administered by the International Monetary Fund. 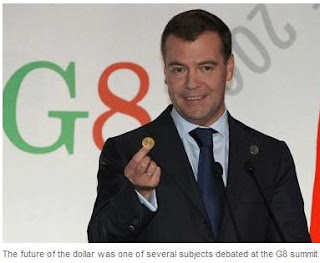 Russia's President, Dmitry Medvedev, made a dramatic appeal for a new unified currency at the meeting of G8 leaders in the Italian city of Aquila. He pulled a coin out of his pocket and said,

“Here it is. You can see it and touch it.” The coin, presented to all the G8 leaders attending the summit, bears the words, “unity in diversity.”

The possibility of a supranational currency “concerns everyone now, even the mints,” Mr. Medvedev said. The test coin “means they’re getting ready. I think it’s a good sign that we understand how interdependent we are.”

I’ve said it before: The introduction of any new global currency would probably trigger an economic meltdown. It’s already going to be nearly impossible for the U.S. to manage its debt load in the coming years. Any reduction in the sale of U.S. debt equities would bring financial Armageddon all the sooner.

All this talk of global currency is perfect stage-setting for the economic system the Antichrist will use to spiritually enslave the world. He may use the economic storm that the rapture will most certainly trigger as a cover for his plan. Whatever the cause, the result will be a world where all cash is digital, and true believers will be locked out of the system.

"And he causes all, the small and the great, and the rich and the poor, and the free men and slaves, to be given a mark on their right hand or on their forehead, and he provides that no one can buy or to sell, except the one who has the mark, either the name of the beast or the number of his name" (Revelation 13:16-17).

On a side note, it amazes me that we have a world leader talking about a global currency, and it gets little attention even from prophecy-minded Christians. I think the strongest indication that we are near the tribulation hour is when key end-time events become regarded as commonplace.

"Just so, when you see the events I've described beginning to happen, you can know his return is very near, right at the door" (NLT Matthew 24:33).