Lebanon Border on a Hair Trigger

Arutz Sheva reports this morning that IDF troops who were taking part in an exercise on Israeli territory were fired upon by Lebanese Army troops. The exchange of fire took place last night in the same area where the summer war of 2006 erupted following the Hezbollah capture and murder of IDF soldiers Ehud Wasserman and Eldad Regev. 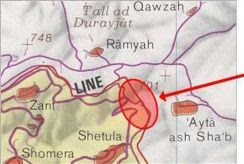 This incident serves to illustrate the military hair-trigger situation that exists along the Israel-Lebanon frontier in the wake of the planned ambush and sniper assault of just six weeks ago. The tactic used in the planned ambush was identical to the one which started the summer 2006 war and comes directly from the pages of "The Art of War" by Sun Tzu: "Draw the enemy out by seizing something of value."

The Lebanese Army, under Hezbollah-Iranian control, is playing with a fire it has no control over. That fire contains a high potential to consume all of Lebanon, per Joshua 13:1-7, which is the topic of a forthcoming Eschatology Today article. Speaking of fire, HAMAS would be wise to leave that issue alone unless they desire to suffer the same fate as their Islamic brethren to the north as prophesied by Asaph in Psalm 83:14.

Next Israel-Hezbollah war will be worse, says U.S. analyst - Ha'aretz