Ahmadinejad and the Twelfth Imam

Iranian President Mahmoud Ahmadinejad arrived in New York City over the weekend and appeared on ABC’s “This Week with Christiane Amanpour.” When he addresses the U.N. General Assembly this week, and does other media interviews, it will be interesting to see if he offers new clues as to where he and the Iranian government are headed and how he is currently thinking about such questions. One thing we can probably expect: Ahmadinejad is likely to repeat his annual prayer for Allah to “hasten” the coming of the Twelfth Imam, the so-called Shia Islamic messiah. 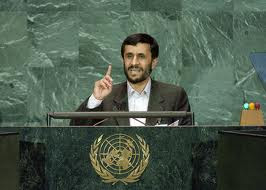 In 2005, Ahmadinejad told colleagues in Iran that the Twelfth Imam would arrive to bring about the end of the world in two to three years. In 2007, he said publicly the Twelfth Imam’s arrival was “imminent.” Presumably, he is disappointed that his messiah has not yet come. But he and Ayatollah Khamenei and the Iranian government continue preparing for the arrival of this “Promised One.” They continue teaching Shia Muslims to get ready for a one-world Islamic government. They keep warning Israel that she will soon be annihilated. They keep defying U.N. resolutions by enriching uranium, and now have enough to build three nuclear weapons. They continue to develop longer range ballistic missiles. They continue strengthening their alliances with Russia, Turkey, Syria, Hezbollah in Lebanon, and Hamas in Gaza.

Israel, meanwhile, continues preparing for a possible pre-emptive strike. Today, Israeli Defense Minister Ehud Barak will meet in Washington with top U.S. defense officials. The Jerusalem Post reports Barak is optimistic that the U.S. will sell Israel advanced “bunker buster” bombs that would be useful in an attack on Iran’s nuclear facilities.

Barak: US will supply Israel with bunker busters - YnetNews